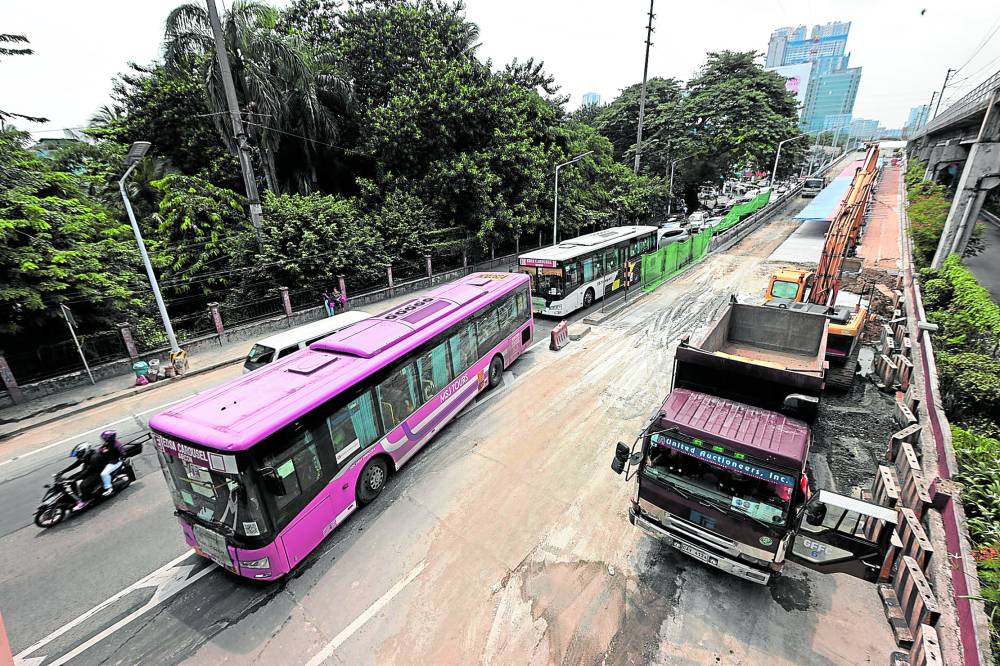 TRAFFIC EXPERIMENT? In a move never before tried at this scale, the Land Transportation Franchising and Regulatory Board will let public utility vehicles, including buses, use more than a hundred new “alternative routes” in Metro Manila for the sake of students trooping back to campus, or those whose schools are resuming in-person classes. —GRIG C. MONTEGRANDE

Buses, jeepneys, and UV Express vehicles will be allowed to ply more than 100 new alternative routes in Metro Manila away from Edsa, while the regular hours of the number coding scheme will be reintroduced as part of preparations to ease traffic in the capital ahead of the August 22 opening of classes.

The new policies were announced separately by the Land Transportation Franchising and Regulatory Board (LTFRB) and the Metropolitan Manila Development Authority (MMDA) on Thursday in anticipation of massive traffic jams in two weeks, as millions of students return to school after two years of remote learning.

According to the LTFRB, the modified routes for public utility vehicles (PUVs) will not pass through Edsa, the capital’s busiest avenue, because it is already served by the Edsa Carousel Busway, or the bus rapid transit line that runs from Monumento in Caloocan City to the Parañaque Integrated Terminal Exchange (PITX).

She said most of the soon-to-be opened routes would be in areas with high concentrations of schools, such as Manila’s University Belt.

Citing Transportation Secretary Jaime Bautista’s orders, Garafil said the objective was to make traveling to schools easier on students, who would be having in-person classes after a two-year break due to the pandemic.

“So we focused on areas with the most schools, which would go to and from those areas,” Garafil told reporters in an interview.

One of the new bus routes extend from Sapang Palay in San Jose del Monte, Bulacan to PITX via Quezon Avenue. This route, which originally ran from Sapang Palay to Taft Avenue, was discontinued when the pandemic broke out in 2020. Garafil explained that the new bus route would pass España Boulevard to give students quicker access to the University of Santo Tomas and nearby schools, such as Far Eastern University, University of the East and National University.

The route will also partly span the length of Taft Avenue, passing the campuses of De La Salle University and College of Saint Benilde, and near the University of the Philippines Manila.

A memorandum circular to be signed by all LTFRB board members is expected to be released next week, detailing all the routes opened in preparation for the beginning of classes, she added.

The LTFRB last week issued a separate memo that allowed the full operation of school transport services, but with several conditions on health protocols.

Some school transport services had suffered because of the pandemic, Garafil said, citing the case of a private school that originally had 96 service operators, now down to 36.

“That is why we in the LTFRB waived all penalties and their confirmation requirements, so that they won’t be bothered with other requirements and they can focus on their registration,” she said.

Also on Thursday, the MMDA announced the revival of the original schedule of the expanded number coding scheme, or the unified vehicular volume reduction program, starting Aug. 15.

Carlo Dimayuga III, the agency’s acting chair, said number coding on major roads in Metro Manila would be in effect from 7 a.m. to 10 a.m. and from 5 p.m. to 8 p.m.

Over the past several months, the scheme had been implemented only during rush hours, from 5 p.m. to 8 p.m., with the exception of Makati City, which kept the original schedule.

According to Dimayuga, the Metro Manila Council agreed to reimplement the coding scheme in anticipation of the large volume of vehicles that would be sending or fetching students to and from schools.

“We predict that when classes open on Aug. 22, there would be a 13-percent increase (in the number of vehicles on the road),” Dimayuga said.

“When it increases by 13 percent, we are expecting 436,000 vehicles a day, on Edsa alone,” he said, adding that during the previous implementation of the number coding scheme, the estimated number of vehicles stood at 400,000 daily.

Under the current scheme, plate numbers ending in 1 and 2 are prohibited on Mondays; 3 and 4 on Tuesdays; 5 and 6 on Wednesdays; 7 and 8 on Thursdays; and 9 and 0 on Fridays.

“[The Pasig River Ferry Service] has five operational boats and an additional four will arrive before Aug. 22,” he said.