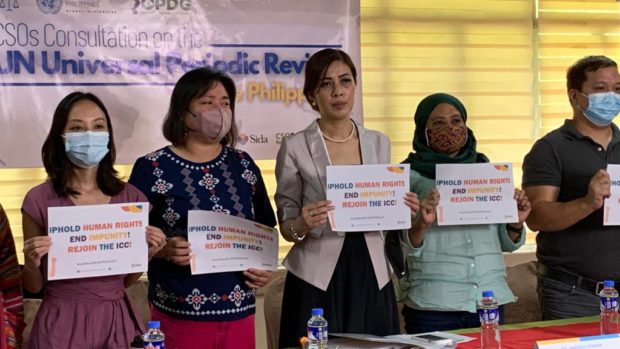 CHR Executive Director Jacqueline de Guia holds a press briefing with civil society organizations’ representatives about consultations for their report, which will be crafted ahead of the UN Universal Periodic Review of the rights situation in the Philippines. (Photo by Gabriel P. Lalu/ INQUIRER.net

MANILA, Philippines — Executive Director Jacqueline de Guia, who is now serving as caretaker of the constitutional body, has assured the public that the work of the Commission on Human Rights (CHR) has not ceased despite the lack of a chairperson.

During a briefing on the upcoming report for the United Nations (UN) Universal Periodic Review (UPR), de Guia was asked how CHR is doing even though it still doesn’t have a chairperson almost two months after President Ferdinand Marcos Jr. took office.

According to de Guia, CHR’s day-to-day operations continue, such as assisting sectors that may need its help.

“Work continues with the CHR, we remain to be an independent, credible, strong institution, I have made sure during the past three months that I have been designated as the caretaker of the Commission to make sure that protection work continues,” she told reporters.

“We continue to investigate, continue to dispatch quick response operations, we maintained open doors to all sectors of society to make sure that our services remain prompt and accessible to our clients,” she added.

The Executive Director of CHR said that promotion work has also been consistent, as they have still held seminars and orientations about rights and called out the government for possible rights violations.

“And promotion work continues, we still have trainings, seminars, and orientations to continue to endeavor the deepening of understanding about human rights,” de Guia assured the public.

“We continue to issue press statements — we call out government if there is a need to, we reinforce those human rights-based or compliant policies and programs as necessary in terms of our policy work,” she added.

According to her, CHR is seeking an independent chairperson and commissioners who will represent different sectors in the country. It is also seeking to maintain its accreditation status as an A-accredited organization, which means that it adheres to UN’s Paris principles.

Since Chito Gascon’s untimely death from COVID-19 in October 2021, CHR’s commissioners have taken turns leading and caring for the organization. However, with most of the CHR commissioners having completed their seven-year terms, the constitutional body is left with a vacancy.

According to De Guia, they have absolutely no clue who the administration might choose for the sixth en banc position on the CHR’s bench.

“There has been a call for an open, transparent process from different sectors of the society and which we have also echoed in the past few months […] but to date, there has been no idea yet on the part of the CHR,” she added.

The CHR is a constitutional body mandated by the 1987 Constitution, under Section 17 of Article 13. It is given the power to conduct motu proprio investigations or to respond to complaints from parties whose rights may have been violated.

However, in recent years, CHR gained a negative reputation as supporters of former president Rodrigo Duterte’s administration claimed that the Commission had become overly critical of the government. Duterte himself threatened to abolish CHR after it raised concerns about his regime’s bloody and violent war against illegal drugs.

Duterte repeatedly justified the drug war, saying that the Philippines would have turned into a narco-state if not for his program.

CHR became a refuge for people seeking justice for the drug war deaths — including what critics have said to be extrajudicial killings (EJKs). As of May 2022, government data said 6,248 drug suspects were killed from July 2016 to April 2020 during legitimate operations, but opposition figures said the true death toll could be between 12,000 to 30,000.

CHR also did its own investigation of the drug war. It found that it encouraged lawlessness and didn’t keep people safe. It also found that some police officers were out to kill during operations. The Commission also noted confusing and fake findings in several drug war cases.