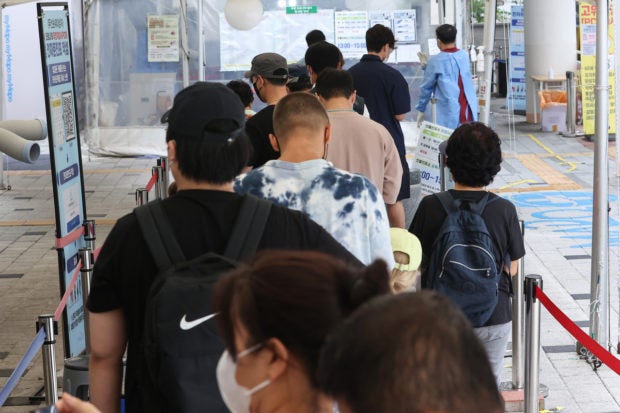 People wait in line to get COVID-19 tests at a testing station located in Mapo-gu, Seoul, Thursday. | YONHAP via The Korea Herald/Asia News Network

SEOUL — Nearly 60 people died with the COVID-19 virus Wednesday, the highest in around three months, and is expected to keep rising along with cases.

According to data released by the Korea Disease Control and Prevention Agency on Thursday, South Korea added 59 deaths from the virus during the previous day, the highest since May 11, when the government added 63 deaths. The death toll came to 25,441, and the fatality rate was 0.12 percent.

The number of COVID-19 deaths is expected to go up in the future as the number of critically ill patients too is on the rise.

According to the KDCA, the number of critically ill patients increased to 418 on Wednesday, up from 402 a day ago. This tally was also the largest in three months.

Under the current trend, the number of critically ill patients is likely to surpass 500 by mid or late-August, while the number of deaths from the virus could fall between 60 and 70, according to experts.

The government is currently recommending people, particularly those who are aged 60 and above, to receive their fourth shots.

On Thursday, the government announced that data, which has shown that a fourth dose of COVID-19 vaccine can significantly reduce the risk of death.

According to data, which collected infection fatality rates by different age groups in the third week of June, over-60 people who received their fourth shots showed 75 percent lower risk of death when compared to the people in the same age group who only had their third shots. When compared to those who received their second and no vaccine, the risk was lower by 80 percent and 96.3 percent, respectively. An official from the country’s health authorities said the independent survey shows how effective a fourth shot is.

In South Korea, the number of people who had their fourth shots, or second booster shots, however, remained low.

As of midnight Wednesday, about 6.4 million people, or 12.5 percent of the population, had received their second booster shots, according to government data.