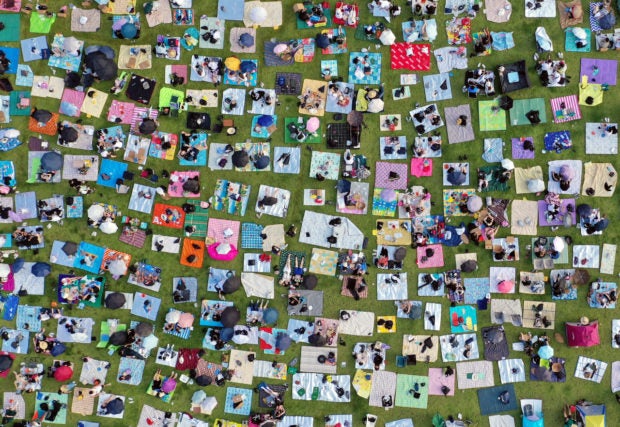 Concertgoers picnic at a park in Incheon on Friday afternoon. (Yonhap via The Korea Herald/Asia News Network)

SEOUL — South Koreans are not letting rising cases of COVID-19 get in the way of their summer plans, with travel and businesses already freed up by current policies.

So far in August, an average of 101,290 cases and 31 deaths were reported per day, climbing from the 80,648 cases and 24 deaths seen between July 25-31. Over two days on Friday and Saturday, 92 patients with COVID-19 died — the highest since mid-May in the aftermath of a deadly Omicron wave that peaked in March.

In recent briefings, the government’s COVID-19 response headquarters has vowed that social distancing won’t be returning, while expanding the eligibility of fourth vaccine doses to people in their 50s.

As the cumulative count of cases here crossed 20 million, which is 38 percent of the entire South Korean population, Vice Minister of Health and Welfare Lee Ki-il said in an Aug. 3 address that COVID-19-related restrictions such as social distancing would not be reinstated.

“We know enough about the virus now to be able to continue normal lives and still keep things under control,” he said.

Apart from a seven-day isolation requirement for people with a positive test and an indoors face mask mandate, most restrictions in the country have been lifted since April.

South Koreans are “less worried” about COVID-19 now than they had been during the previous stages of the pandemic, according to Yoo Myoung-soon, a public health communications professor at Seoul National University.

Her research team’s July 1-3 survey of 1,028 adults aged 18 and older found that while 49 percent of the respondents said they believed another resurgence in the coming months was “likely,” they perceived the disease to be less threatening.

The possible arrival of the next COVID-19 wave is being shrugged off, at least for the time being.

After two consecutive summers of social distancing, partying has returned to parks and beaches.

Music festivals, live concerts and other mass-gathering events are back in action. A number of them, including K-pop star Psy’s “water cannon” concerts, have already led to self-reported cases among attendees.

Some of the summer revelers say they are “revenge partying” to make up for the years lost to the pandemic.

One Seoul resident in his early 30s, who spent the weekend in Incheon for a rock festival, said he was “determined to enjoy the summer while it lasts.” “It might not be long before we’re back to social distancing,” he said, adding that he was fully vaccinated.

“I made sure I was being responsible over two years, not going out and staying isolated. I don’t think I can take another year of that again,” said a Gimpo resident in her late 20s, who returned from a three-day trip to Jeju in late July. She said she’s gotten three shots before she was infected in April.

Travels across the country have been on the rise with the dawn of the summer holiday season, according to the Ministry of Health and Welfare’s Aug. 3 analysis of smartphone data. The ministry said travel to regions outside Seoul have increased by 11 percent during the latter half of July compared to the preceding half of the month.

Now that post-arrival quarantines and other travel restrictions are gone, more South Koreans are flying again.

Contrary to assurances from top officials, however, hospitals fear that some of the nightmares suffered in the past surges of the pandemic could be repeated.

In July, at least four children aged 10 years or younger died from COVID-19 while waiting for an available hospital bed. As of 5 p.m. Saturday, 37 percent of all critical care beds have filled up.

COVID-19 response policies are backpedaling despite the worsening signs.

In late January, as the BA.1 subvariant began dominating local cases, South Korea switched to an “Omicron response plan,” which entails offering “focused protection” to at-risk groups while having minimal restrictions for the rest of the population.

Starting this month, however, the Health Ministry announced it was ending remote monitoring of older adults aged 60 and older and others who are clinically vulnerable while they are in home isolation from COVID-19. By default, patients of all ages and risk profiles isolate at home unless they develop serious symptoms.

Over the Omicron phase of the pandemic, South Korea has adopted policies that “cut down on the administrative burden, opting to rely mostly on pharmaceutical interventions,” said Dr. Oh Ju-hwan, a public health policy professor at Seoul National University.

But access to oral treatments remains restricted, with only about 290,000 patients having been prescribed Paxlovid between January 14 and July 14 this year. Omicron-adapted vaccines are not anticipated to become available here until much later in the year.

Infectious disease professor Dr. Kim Woo-joo of Korea University worried that the summer of freedom is “likely to be short-lived.”

“Unfortunately, reinfections are increasingly becoming a common experience due to the BA.5 subvariant’s rise to dominance and waning immunity, among other factors,” he said.