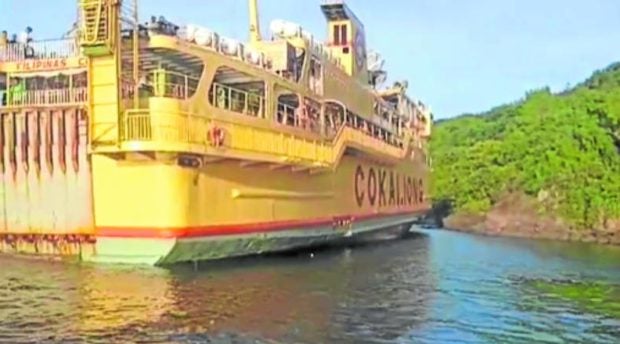 COSTLY SNOOZE | Somebody reportedly slept on the job and caused this. The MV Filipinas Cebu stuck in shallow waters off Concepcion, Iloilo. (Photo from a Philippine Coast Guard video)

MANILA, Philippines — A passenger vessel ran aground in the shallow waters off Concepcion town in Iloilo province past midnight on Tuesday after the helmsman reportedly fell asleep.

En route to Tinago Port in Cebu City, the 72-meter MV Filipinas Cebu of Cokaliong Shipping Lines ran aground at 12:08 a.m. on Tuesday in the area between the islands of Igbon and Agho, the Philippine Coast Guard (PCG) said.

After leaving the Fort San Pedro Pier in Iloilo City past 7 p.m. on Monday, the vessel got stuck near the shore of Sitio Mape in Barangay Igbon, Concepcion.

An investigation showed that the man steering the ship fell asleep while on the job. “It remains unclear who were the personnel at the bridge during the time of the incident… The statements of the vessel’s master would be investigated,” the PCG said.

The PCG responded by sending a patrol boat to provide assistance. All 223 passengers and 38 crew members of the 2,726-ton vessel were unharmed and the site of the incident showed no signs of an oil spill.

The MV Filipinas Nasipit, owned by the same shipping company, was dispatched from Maasin, Leyte province, two hours after the incident to pick up Filipinas Cebu’s passengers and crew and complete their trip. They arrived safely at their destination on Wednesday afternoon.

The PCG said it had advised the vessel’s master to file a marine protest at the PCG station in Iloilo.

The Maritime Industry Authority has suspended the vessel’s safety certificate pending its inspection for any damage.

Ship with 260 passengers aboard runs aground in Iloilo

Ship that ran aground during ‘Odette’ catches fire off Mactan Island

24 rescued as ship runs aground in waters off Zambales