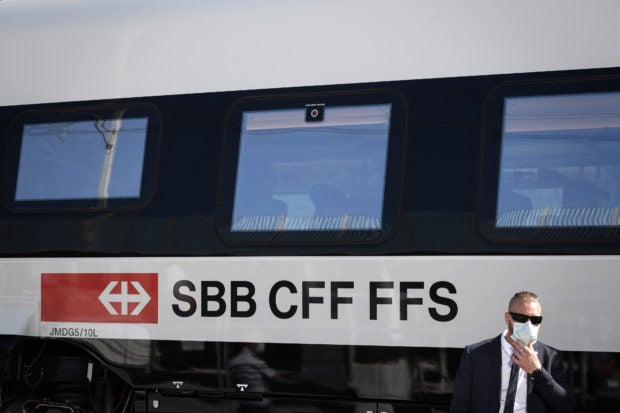 A body guard stands next to a train on September 4, 2020, in Camorino, southern Switzerland, during the inauguration of the Ceneri Base railway tunnel. AFP

ZURICH, Switzerland — Switzerland, famous for its punctual railways — celebrated the 175th anniversary of passenger train services in the country on Tuesday with a re-creation of the first journey featuring a steam locomotive.

The first train service on August 9, 1847 linked Zurich with Baden, 23 kilometres to the northwest — a trip which took 33 minutes.

Transport minister Simonetta Sommaruga and around 150 guests boarded the special train to Zurich to mark the anniversary, which involved historic carriages and a steam locomotive.

“The train is part of our basic service. It brings people together and strengthens cohesion in our country,” Sommaruga said, according to the ATS national news agency.

The line between Zurich and Baden was built in 16 months. One of the original bridges is still in use.

The journey now takes 15 minutes and trains run every quarter of an hour.

Swiss Federal Railways chief Vincent Ducrot said there were “many new chapters” to be written in the “success story of the Swiss railways”.

“Building on our current strengths, we want to make rail and public transport even more flexible and efficient,” ATS reported.

Few countries have a rail network as dense as Switzerland.

Ducrot said the main challenge now was to run more trains on the existing network.

Ducrot also stressed the importance of improving international rail links “if we don’t want to remain an island in the middle of Europe”.