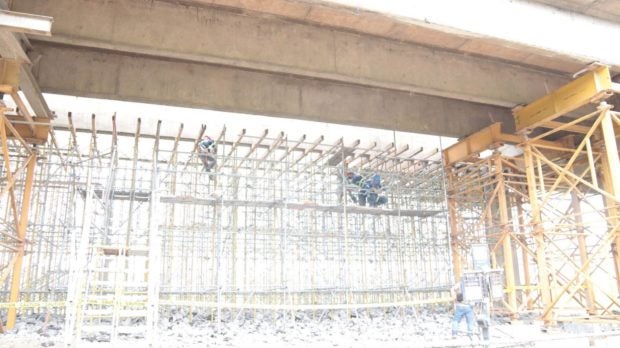 Parts of Candaba viaduct are being shored up as seen in this photo taken early July. (Photo courtesy of NLEX Corp.)

This allows undisrupted repairs on the almost 50-year-old bridge in Pampanga.

In a statement, NLEx Corp. president and general manager Luigi Bautista thanked Governor Dennis Pineda for getting the cooperation of truckers in Pampanga to comply with weight limits on NLEx and the Subic-Clark-Tarlac Expressway.

Pineda stopped quarry operations for 15 days starting August 2 to give time for haulers to cut the sidings of their trucks to comply with load limits. The foregone revenues of the provincial government from the suspension amount to around P30 million.

Bautista explained that NLEx’s anti-overloading program done under Republic Act No. 8794 “upholds safety by restricting overloaded vehicles from entering the expressways or asking them to go to the nearest exit point as the extra load may affect vehicle control, thus, cause accidents and endanger other motorists.”

He reported that more than 8,000 violators of vehicle load limits had been cited for penalties from January to June.

To enforce weight limits, Bautista said NLEx dispatched teams to supervise weighing stations and prevent the entry of vehicles carrying loose construction aggregates not leveled or improperly covered as required by the Toll Regulatory Board.

Bautista cited NLEx’s consulting firm AMH Philippines’ findings that “subjecting the Candaba Viaduct to heavy loads more than what the bridge was designed for, is causing continuous cyclical fatigue stress, which in turn affects the condition of the bridge.” INQ