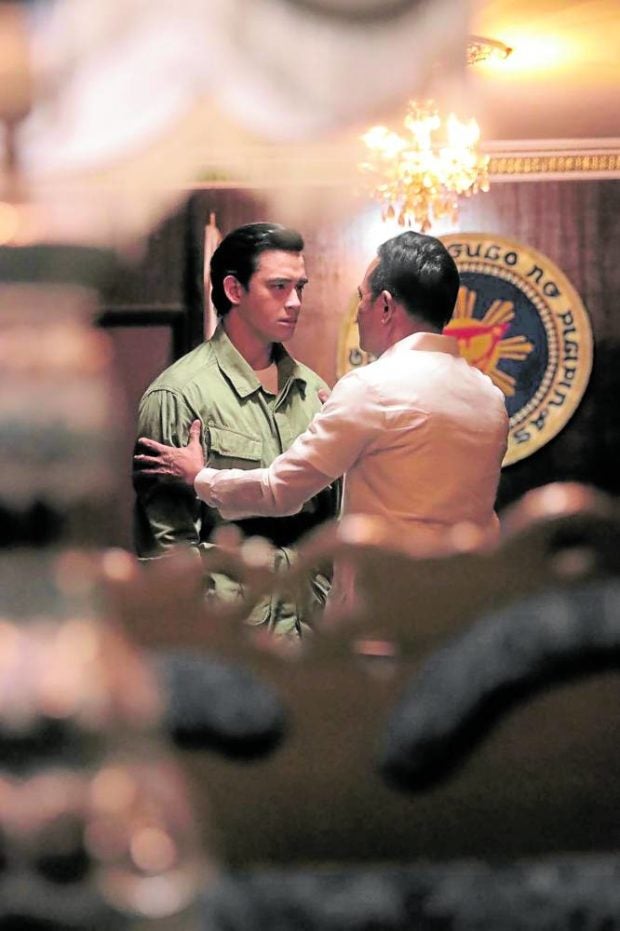 A scene in the movie “Maid in Malacañang” with Diego Loyzaga as Ferdinand “Bongbong” Marcos Jr. and Cesar Montano as Marcos’ father.

MANILA, Philippines — The country’s Catholic major superiors and consecrated people were outraged at the highly controversial film “Maid in Malacañang” because it vilifies all consecrated women.

According to the Conference of Major Religious Superiors (CMSP), in a recent statement through the Catholic Bishops’ Conference of the Philippines, the portrayal of the Carmelite nuns is “reprehensible.”

“A malicious attack on the integrity of the nuns is an affront to all consecrated women and harms the unity of the Church at large,” said CMSP co-chairpersons Fr. Elias Ayuban and Sr. Cecilia Espenilla.

“In this regard, we express our solidarity with the maligned nuns, who are our fellow consecrated persons, in their cry for truth and fairness,” they said.

The film was also condemned for “misrepresenting the truth.”

“We are one with the Church and the nation in building unity based on truth. Thus, we call on each one to be discerning and critical not just about this film, but in all aspects of communication media,” they said.

“To tell the truth, to stand for the truth, and to defend the truth is a moral imperative in a society where fake news, disinformation, misinformation, and peddling of lies become normal and natural,” they added.

As consecrated men and women, they “will never compromise our prophetic role[s].”

“We continue to remain vigilant and reaffirm our commitment to oppose and denounce any form of historical distortion for indeed ‘the truth will make us free,'” they said.

The film, produced by Sen. Imee Marcos herself, was about the Marcoses’ last 72 hours in the Palace before they were exiled. It depicted the Carmelite nuns playing mahjong with the late former President Cory Aquino.

In truth, however, the Carmelites hid Aquino before the Edsa People Power Revolution in 1986 despite the risks, as it was their “contribution to put an end to a dictatorial regime” under then President Ferdinand Marcos Sr.

Imaginary events can never be history, Binay says of ‘Maid in Malacañang’