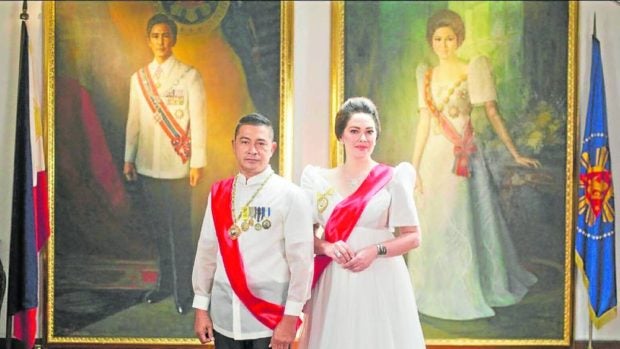 A scene in the upcoming film “Maid in Malacañang” with Cesar Montano as President Ferdinand Marcos Sr. and Ruffa Gutierrez as Imelda Marcos.

MANILA, Philippines—“It’s a work of truth,” insisted Senator Imee Marcos on Wednesday amid accusations that the “Maid in Malacanang” movie was attempting to revise history.

In an interview at the Senate, Marcos encouraged everyone, including critics, to watch the movie first before they make any comments about it.

(It’s up to the people to judge if it’s a work of art or not. But all I can say, on my part, is that it’s a work of truth. So, as much as possible, everything is accurate and historically correct.)

“I believe that by and large, it’s a work of truth and certainly, we’ve tried as best as we can to stay to historical fact,” the senator added.

Marcos wondered, however, why critics rushed to condemn the movie as historical revisionism when they had not seen it since the screening started only on Wednesday.

READ: Carmelites nuns on ‘Maid in Malacañang’: Attempt to distort history is reprehensible

(Why did they say it’s revisionism when they have not seen it yet? But, of course, no one has seen it yet because it just opened today.)

(I don’t understand why they already know the film, they have not seen it.)

Marcos said it would be the first time Filipinos will get a glimpse of what actually happened at Malacañang during their family’s last days in power.

(We already know the ending of this story. We already know what happened 36 years after. Everyone knows it. But what we don’t know is what  happened to a family inside the Palace)

(At one point, teasing, arguments, and small talks in a family is typical. But on the other hand, we also know that this is already part of our history;  this has also become the story of the country.)

The senator said she hoped the movie could start a public discussion on what happened during that time.

Read Next
5-month-old girl infected with COVID-19 in Olongapo City
EDITORS' PICK
Percy Lapid’s kin: ‘We demand that his cowardly assassins be brought to justice’
Nothing’s certain so here’s how everyday Filipinos can make the most out of their Plan B
Do all the things you do, faster
PNP vows to bring justice for slain Percy Lapid; says probe underway
House energy committee chair Arroyo bats for cheap electricity
‘Seniority’ requirement despite vacant posts in DOH bothers senators
MOST READ
Student stabs teacher dead in Samar town
Trixie Angeles quits as press secretary due to health reasons
Not rehired?: Trixie Angeles not on list of reappointed Cabinet execs
Heart Evangelista to stay abroad ‘indefinitely’: ‘Hindi muna ako babalik’
Don't miss out on the latest news and information.