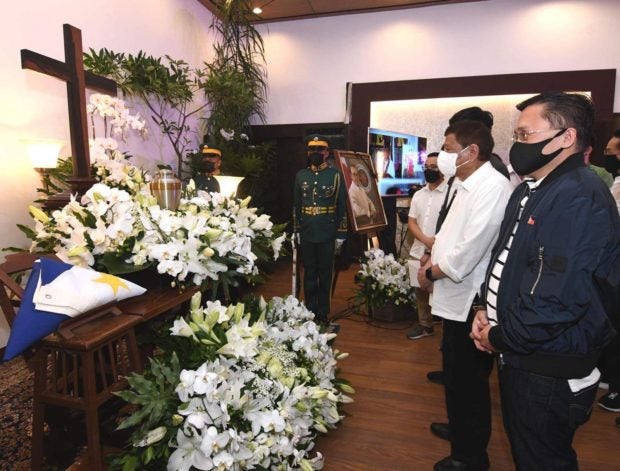 MANILA, Philippines — Former President Rodrigo Duterte on Thursday visited the wake of one of his predecessors, former chief executive Fidel V. Ramos, revealing that the late President was the first to push him to seek the presidency in 2016.

Duterte, in a chance interview with reporters after his visit, recalled a meeting he was in when Ramos gave a contribution to his then-presidential campaign.

“Tremendous, I would say. Si FVR (Fidel V. Ramos), if I may divulge now, was the first guy who egged me to run,” he said.

That was, Duterte said, his fondest memory of the late chief executive.

Duterte described Ramos as a “military man” who is “strict” and pushes through with his decisions.

(He was strict, especially when he was not yet President. But when he decides on something, it’s decided already. He has one word.)

He will be accorded a state funeral with full military honors, Malacañang earlier said.

Ramos’ wake started on Thursday, Aug. 4, and will last until Aug. 8. He will be interred at the Libingan ng mga Bayani on Aug. 9.

Bongbong Marcos: FVR was icon of stability after ‘tumultuous events’ in 1986

Read Next
LPA to bring rain to Metro Manila, Visayas on Friday
EDITORS' PICK
Do all the things you do, faster
Motorcycles, smartphones, and cash prizes up for grabs in TNT’s ‘Tuloy Ang Saya’ Raffle in Mindanao
House energy committee chair Arroyo bats for cheap electricity
NCR at increased COVID risk again
New PS-DBM director says DepEd laptop MOA ‘not legal’
House okays budget; ways to go in Senate
MOST READ
Robredo’s tarpaulin portrait at Palace just a ‘placeholder’
Shopee PH gets flak for getting Toni Gonzaga
Robredo supporter tackles elephant in room: No massive fraud in 2022 polls, surveys were just right
DepEd: We are in a crisis situation in education sector
Don't miss out on the latest news and information.