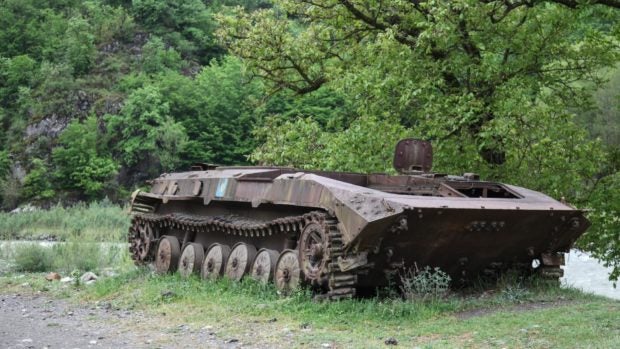 BAKU — Azerbaijan said its forces had crushed an Armenian attack near the disputed enclave of Nagorno-Karabakh on Wednesday, prompting international calls for an end to fighting in a region that has been a flashpoint for 30 years.

Nagorno-Karabakh broke away from Azerbaijan with Armenian support after a bloody post-Soviet ethnic conflict in the early 1990s. In 2020, Azerbaijan successfully won back part of the territory controlled by the separatists.

Under the terms of a subsequent ceasefire, Russian peacekeepers were deployed to protect the remainder of the separatist-held territory. Both sides though accuse each other of breaches and in recent days violence has flared.

The Azeri defence ministry said Armenia had grossly violated the ceasefire by committing an act of sabotage that killed one soldier. In addition, Baku said its forces had beaten back an Armenian attempt to capture a hill in an area controlled by the Russian peacekeepers.

“As a result, those fighting for the illegal Armenian armed formations were killed and injured,” it said in a statement, demanding all Armenian troops pull out of the area and promising “crushing” countermeasures if necessary.

In response, Armenia’s foreign ministry said Azerbaijan had violated the ceasefire by launching an attack in areas controlled by the peacekeepers. In a statement, it said Yerevan wanted the international community “to undertake measures toward halting the aggressive behaviour and actions of Azerbaijan”.

The European Union called for an immediate end to hostilities and said both sides should respect the ceasefire, a call echoed by the Polish chairman of the Organization for Security and Cooperation in Europe.

“The United States is deeply concerned by and closely following reports of intensive fighting around Nagorno-Karabakh, including casualties and the loss of life,” U.S. State Department spokesman Ned Price said. “We urge immediate steps to reduce tensions and avoid further escalation.”

Russia said the situation in the areas controlled by its peacekeepers was getting more tense and reported at least one violation of the ceasefire by Azeri forces, Interfax said.