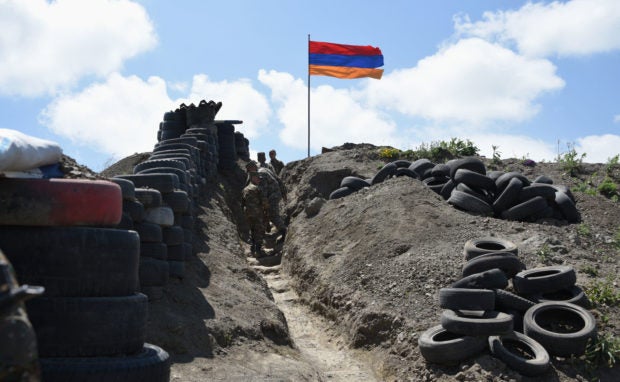 Soldiers walk in a trench at a border check point between Armenia and Azerbaijan near the village of Sotk, Armenia, on June 18, 2021. AFP FILE PHOTO

YEREVAN — Three Armenian soldiers were killed in border clashes with Azerbaijani forces on Wednesday, in some of the heaviest fighting between the Caucasus rivals since last year’s war over the disputed Nagorno-Karabakh region.

The defense ministries of both countries reported the clashes and blamed the other side for initiating them.

Tensions have been running high along the border in recent weeks, with a series of reported shootouts.

Last year’s six-week war over Nagorno-Karabakh claimed some 6,500 lives before it ended with a Russian-brokered ceasefire that saw Armenia cede territories it had controlled for decades.

Armenia has accused Azerbaijani forces of a series of border intrusions since the war and of seizing pockets of territory including along a lake shared by the two countries.

Armenia’s defense ministry said an intense firefight had taken place Wednesday near the village of Sotk close to the border with Azerbaijan’s Kelbajar region, one of those Baku reclaimed after the war.

As of 8:30 am (0430 GMT) Wednesday three Armenian soldiers were dead and two wounded, the ministry said in a statement.

“The Azerbaijani side is deliberately escalating the situation as its forces remain illegally on Armenia’s sovereign territory,” Armenia’s foreign ministry said.

Azerbaijan’s defense ministry said Armenian forces had opened fire towards Azerbaijani positions in Kelbajar in the early hours of Wednesday and that two of its servicemen had been wounded.

It said Azerbaijan had agreed to a Russian-proposed ceasefire from 10:00 am local time (0600 GMT) but that Armenian forces had continued shelling its positions with tanks and mortars.

“Armenia bears full responsibility for the escalation of tensions,” it said.

The border clashes have raised fears of another flare-up in the decades-old conflict over Nagorno-Karabakh, an ethnic Armenian region of Azerbaijan that broke away from Baku’s control in the early 1990s in the aftermath of the Soviet Union collapse.

Moscow has deployed some 2,000 peacekeepers in the area to oversee the ceasefire it mediated to end the fighting.

It has also offered to help in resolving the border disputes by working with the two sides to clearly define the frontier.

The United States and France have called on Azerbaijan to pull back its forces.