IN CONTEXT: The roots of the Armenian-Azerbaijani conflict | Inquirer News
Close
menu
search

IN CONTEXT: The roots of the Armenian-Azerbaijani conflict 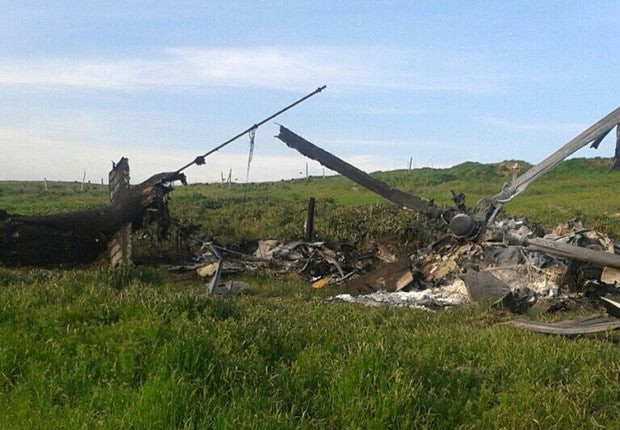 Remains of a downed Azerbaijani forces helicopter lie in a field in the separatist Nagorno-Karabakh region, on Saturday, April 2, 2016. In a statement, Azerbaijan’s Defense Ministry said 12 of its soldiers ‘became shards’ (Muslim martyrs) and said one of its helicopters was shot down. At least 30 soldiers and a boy were reported killed as heavy fighting erupted Saturday between Armenian and Azerbaijani forces over the separatist region of Nagorno-Karabakh. AP

Since 1994, Nagorno-Karabakh, where heavy fighting between Azerbaijani and Armenian forces erupted Saturday, has existed in a tense limbo. AP explains a little more about the conflict:

HOW BIG IS THE AREA?

This mountainous region of Azerbaijan, with about 150,00 residents in an area of 12,000 square kilometers (4,400 square miles) — somewhat smaller than the U.S. state of Connecticut — has been under the control of local ethnic Armenian forces and the Armenian military since the end of a full-scale war that killed about 30,000 and displaced an estimated 1 million.

WHEN DID IT START?

Long-simmering tensions between Christian Armenians and mostly Muslim Azeris began boiling over as the Soviet Union frayed in its final years. Once the Soviet Union collapsed and the republics became independent nations, war broke out. A 1994 cease-fire left Armenian and Azerbaijani forces facing each other across a demilitarized zone, where clashes were frequently reported.

International mediation efforts to determine the region’s final status have brought little visible progress. The unresolved conflict has been an economic blow to Armenia because Turkey has closed its border with Armenia, leaving the country with open borders only with Georgia and Iran.