Some Comelec employees still on WFH setup after office fire 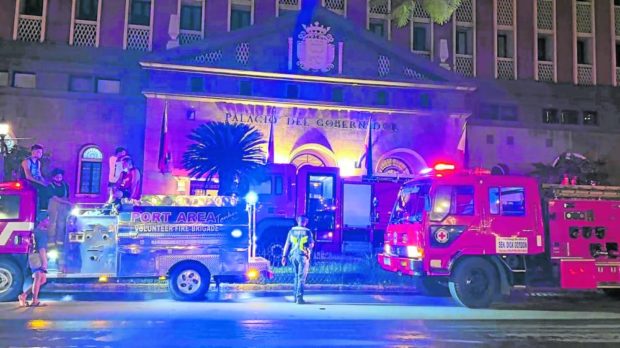 ‘UNDER INVESTIGATION’ Firemen arrive at the Comelec building on Sunday night. The fire was on second alarm about five minutes after it started but was placed under control an hour later. —FILE photo from inquirer.net video team c/o Ram Nabong

MANILA, Philippines — The Commission on Elections (Comelec) on Wednesday said some employees whose office was affected by the fire are still required to work from home.

In a memorandum dated August 3, Comelec Executive Director Bartolome Sinocruz, Jr. said employees whose offices are located on the 5th floor would remain at work from home.

Comelec acting spokesperson John Rex Laudiangco, in another statement, said: “Given that electrical power has yet to be fully restored at the Comelec offices located at the 5th Floor, officials and employees assigned therein shall likewise directed to be on work-from-home status, however ensuring continuity of all operational and administrative functions.”

On the other hand, those offices and departments of the Comelec Main Office situated in the Palacio del Gobernador’s Ground, 7th and 8th Floors will resume on-site work on Thursday.

However, the work-from-home scheme is available to senior citizens, persons with disabilities and comorbidities, pregnant women, subject to the same condition of prior approval from their respective head of office or department.

It can be recalled that the office of the Commission on Elections (Comelec) at the Palacio del Gobernador in Intramuros, Manila caught fire that reached the second alarm on Sunday night.

The Comelec has offices on the building’s fifth, seventh, and eighth floors, which is also the office address of the Intramuros Administration and other agencies.