Native textiles soon to get security features vs fakes 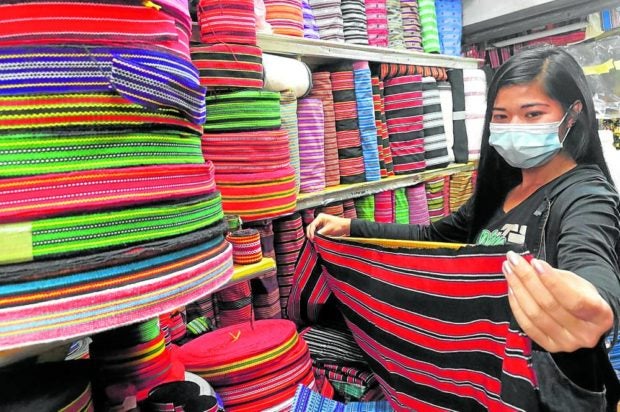 The PTRI is also generating QR (quick response) code markings for weavers as part of the digitalization of the country’s handloom weaving industry, said Jennili Caya, the agency’s senior science researcher. She disclosed the plan during the second Cordillera weaving summit organized by the Department of Science and Technology here on Tuesday.

Caya said woven items that are authenticated by the government should deter or outsell counterfeit Cordillera woven products, which flooded stores in Metro Manila and Baguio last year.

Before the year ends, the government is opening a digital weaving registry for traditional weavers to help keep track of products produced and sold in local and foreign markets, Caya said.

“Our aim is to authenticate and validate each woven product,” she said, adding there would be security features if these are sold in the markets. The security devices are being developed and may be ready next year.

The government would also build a data repository for all weaving patterns, including cultural artifacts of indigenous people (IP) that require conservation, Caya said.

Many of these items, she said, are products of “sacred practices” and IP communities may be sensitive to plans for translating their cultural artifacts “into something as cold as technology.”

But digitizing this type of indigenous knowledge is one way of preserving, studying and even reapplying these cultural skills and products, Caya said.

The system would ensure that the patents and other proprietary rights over the digitized weave patterns remain under the control of an IP clan or community.

According to Caya, the digital network would also discourage groups or individuals from stealing, misappropriating, or patenting these important cultural items or new patterns that handloom weavers might create in the future.

The registry and the database would also help the government identify and plan for the development of the country’s traditional weavers, she said.