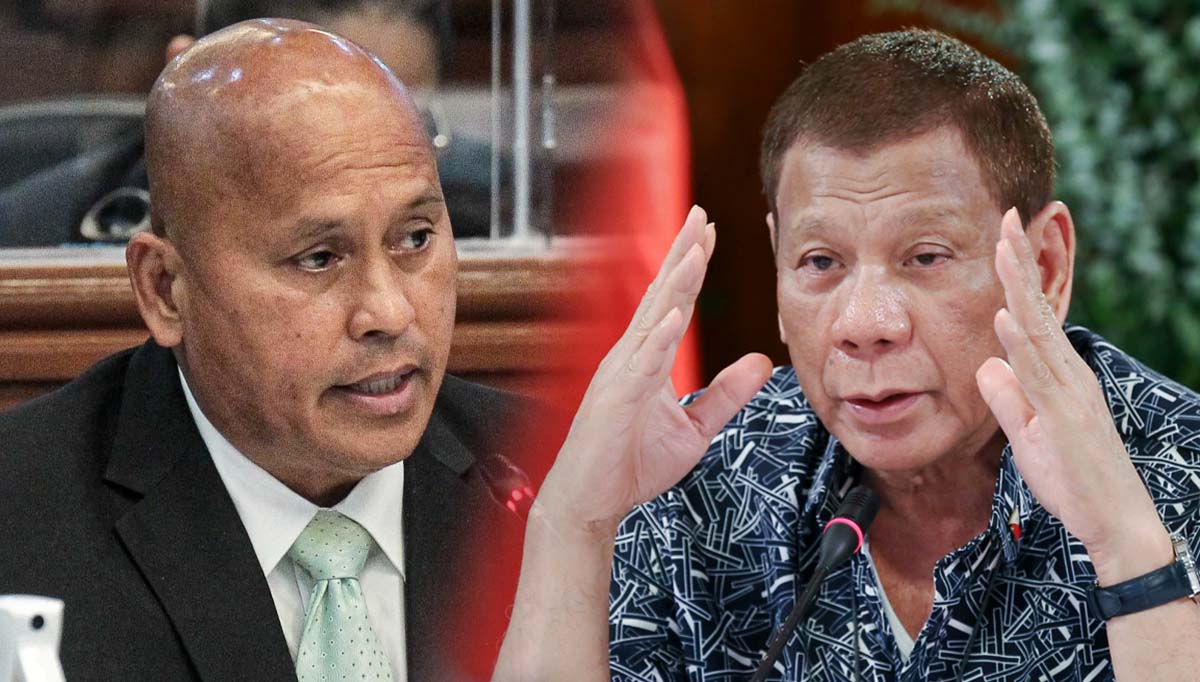 MANILA, Philippines—Throughout his six-year presidency, Rodrigo Duterte was not known to hold anything back on the subject of criminality and drugs. “Kill them all” was a favorite remark.

Fatou Bensouda, former chief prosecutor of the International Criminal Court (ICC), expressed belief that the statements were not empty words. Duterte’s “kill” remarks had encouraged, supported and, in some instances, urged the public to kill drug suspects and “indicate a state policy to attack civilians.”

But Duterte’s first Philippine National Police (PNP) chief, Ronald “Bato” Dela Rosa, who was elected to the Senate in 2019, said the kill threats were just “figures of speech” that do not constitute evidence to prosecute and try Duterte for crimes against humanity.

“President Duterte has already finished his six-year presidency. Until now, we have not yet adjusted to his style? What he said are all figure (sic) of speech. Hyperboles, metaphors, or whatever you call it,” Dela Rosa said last July 18.

Lawyer Edre Olalia, president of the National Union of People’s Lawyers (NUPL), said Dela Rosa’s defense of Duterte’s kill remarks is “insulting our intelligence,” adding that “it is more like disfiguring reality.”

“The dead bodies line up all the way to where the enablers are,” he told INQUIRER.net. NUPL represents Rise Up for Life and for Rights, which filed a communication, similar to a complaint, at the ICC.

Back in 2016 when he was still campaigning, Duterte told a crowd in Pangasinan that he will wage a war on drugs and criminality: “When I become president, I’ll order the police and the military to find these people and kill them.” 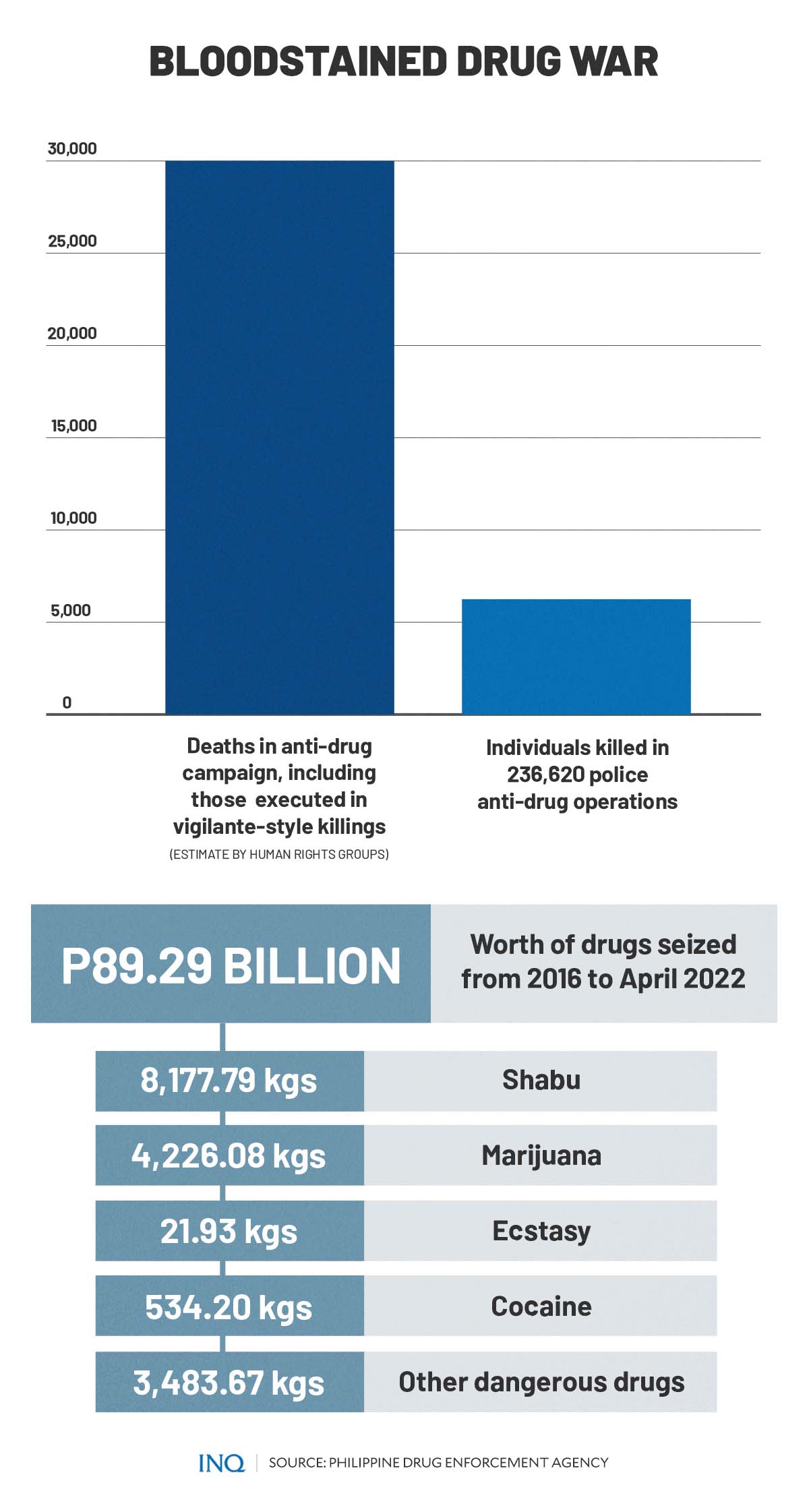 Six years later, the Philippine Drug Enforcement Agency said that as of last April 30, 6,248 drug suspects had been killed in the government’s anti-drug campaign, a figure which rights groups said could exceed 30,000.

Dela Rosa likewise defended Duterte’s threats last year, when he said that the instruction to “kill, kill, kill” communist rebels was “hyperbolic” to indicate that “he really means business.”

Then senator Richard Gordon, however, warned of “disastrous consequences” if the remarks were misinterpreted as policy. Looking back, INQUIRER.net lists down some of Duterte’s kill remarks and the deaths which followed those.

Back in 2016, already president and visiting a community in Tondo, Manila, Duterte said: “These sons of bitches are destroying our children. I warn you, don’t go into that, even if you’re a policeman, because I will really kill you.”

“If you know of any addicts, go ahead and kill them yourself as getting their parents to do it would be too painful,” Duterte said in June 2016, as he prepared to assume office as president.

In July of the same year, stressing that the problem on illegal drugs is “a clear and present danger,” he told police that he was ready to die for them and protect them: “Do not bullshit me, do your duty, I will die for you.”

“Do your duty, and if in the process you kill 1,000 persons because you were doing your duty, I will protect you,” he addressed himself to officials as Dela Rosa formally took command of the PNP.

His words, however, found themselves being useful as evidence when Bensouda requested the ICC pre-trial chamber to investigate the killings in the Philippine government’s war on drugs.

This, as the New York-based Amnesty International said 7,025 people were killed in police operations and vigilante-style killings in the first six months of Duterte’s presidency, an average of 34 people getting killed per day.

It was on August 5, 2016 when Duterte, who promised to eradicate criminality in six months, issued a “shoot-to-kill” order against “narco-politicians,” saying that he will not forgive them for the crisis they created.

“Son of a bitch. Did you not think about where this problem would lead us? […] I will have you killed. Have you seen what you’ve done to the Philippines?” he said in Davao City.

“My order is shoot-to-kill. I don’t care about human rights. Believe me. I don’t give a shit about what they will say. This war is against drugs, we have a crisis. I will not hesitate to kill you.”

Duterte listed down more than 150 judges, local executives, and retired and active police officers who are allegedly involved in the illegal drug trade on Aug. 7 of the same year.

“Any mistake of the military and the police here, I will take responsibility. I ordered the listing, revalidation, I am the one reading it and I am the sole person responsible for the same,” he said.

Then on Oct. 28, 2016, Samsudin Dimaukom, mayor of Datu Saudi-Ampatuan town who was on Duterte’s list, was killed in a gunfight with local police, that left 10 people dead including the mayor.

When police killed 32 people in a simultaneous “One Time Big Time Operation” against drugs in Bulacan province on Aug. 15, 2017, the single deadliest day in the government’s war on drugs, Duterte said “that’s good.”

“The ones who died recently in Bulacan, 32, in a massive raid, that was good. If we could kill another 32 every day, then maybe we can reduce what ails this country,” he said while addressing himself to the Volunteers Against Crime and Corruption.

He said there could be an outcry again over the deaths in Bulacan, however, he stressed that he was certain that the killings were not planned because the police would get nothing from it except cases.

The Bulacan police said 67 simultaneous police operations were conducted by 24 police stations in the province in a bid to continue the war on illegal drugs, loose firearms and implementation of search warrants in Bulacan. 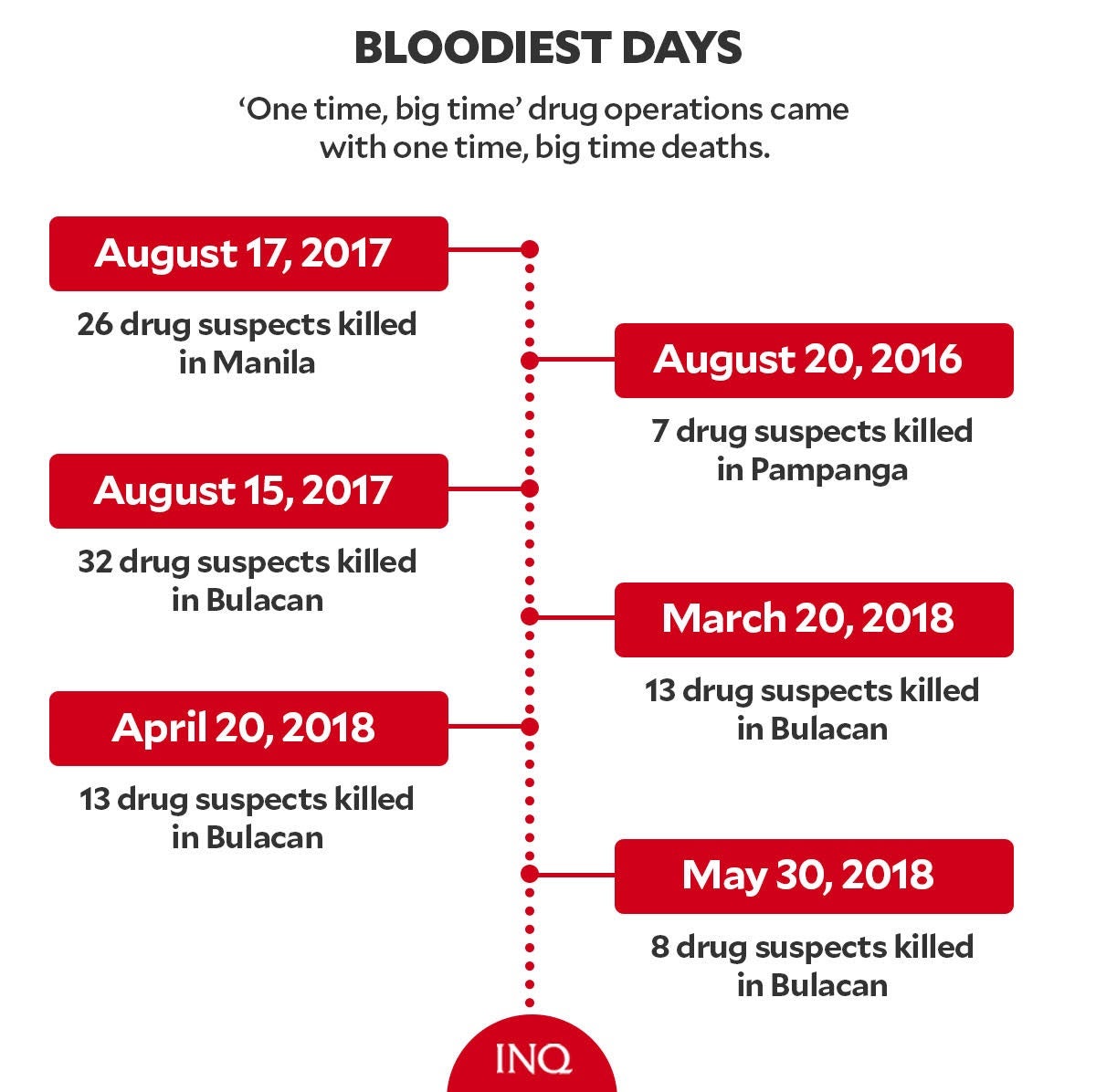 Then on the night of Aug. 17 of the same year, 25 people died in police operations in Manila—the second night of heavy bloodshed that week as the government intensified its crackdown on criminality.

As Duterte addressed himself to the National Task Force to End Local Communist Armed Conflict, which he created to end the insurgency by 2022, he ordered the military and the police to “finish off” and “kill” all communist rebels.

“I’ve told the military and the police, that if they find themselves in an armed encounter with the communist rebels, kill them, make sure you really kill them, and finish them off if they are alive.”

“Forget about human rights. That’s my order. I’m willing to go to jail, that’s not a problem […] I do not have any qualms about doing the things that I have to do,” Duterte said on March 5, 2021.

Then on March 7 last year, nine unarmed activists were killed in simultaneous police and military operations in Calabarzon—six in Rizal, two in Batangas, and one in Cavite. Six activists were arrested. 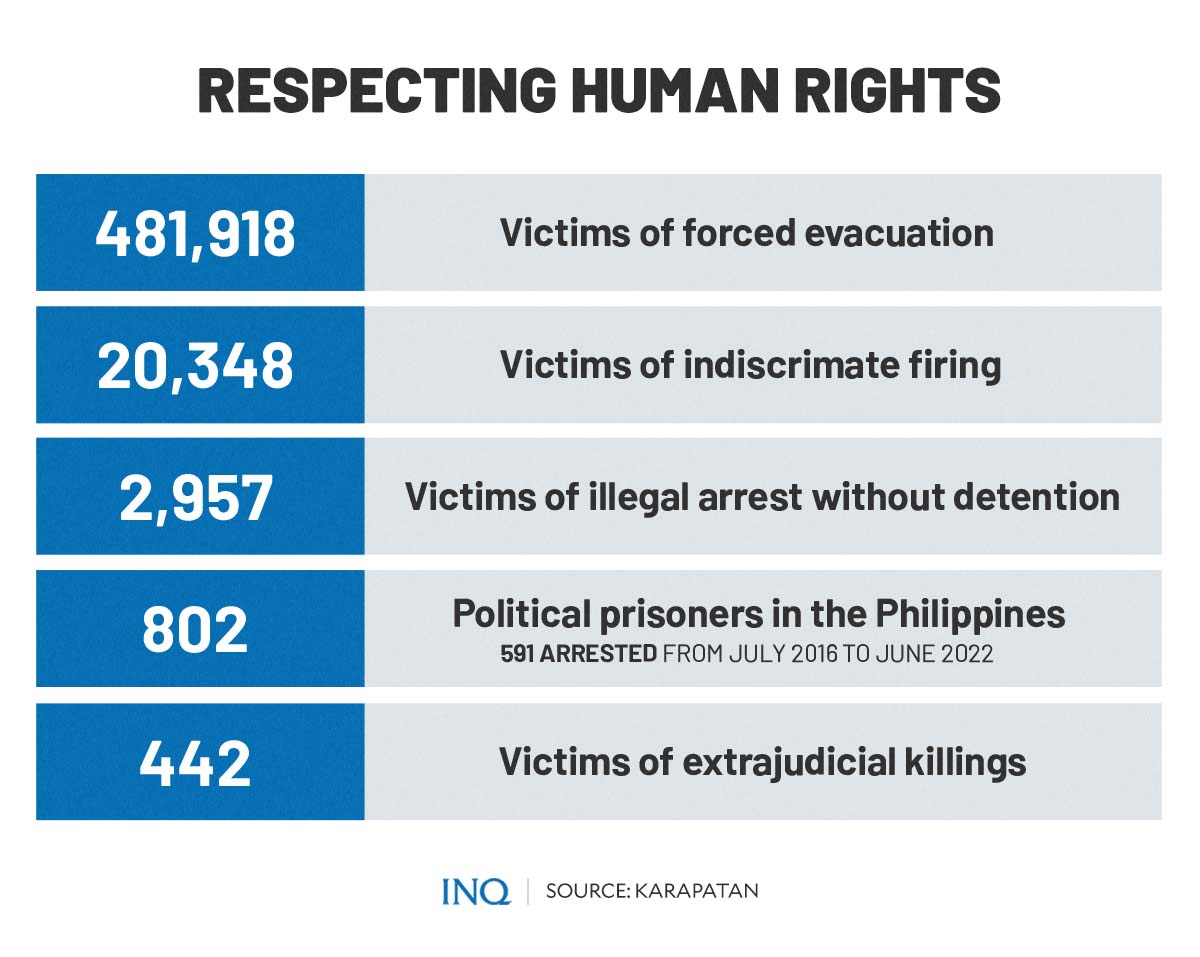 Last July 25, families of the victims of the government’s war on drugs asked the ICC Pre-Trial Chamber to continue with its investigation “to expose the widespread and systematic killing of the poor.”

“Most of those killed were our children who would have been helping us sustain our families, the mother[s] and fathers who are working for their families,” the group Rise Up for Life and for Rights said.

The victims’ families stressed that “the killings of our relatives are not fabricated stories,” saying that “let us not forget that the people who are murdered have the right to live and to defend themselves.”

Last June, ICC prosecutor Karim Khan said he would seek to reopen an investigation into the killings and rights violations allegedly committed by the Duterte administration in the war on illegal drugs.

Khan said that after a review of all the information available publicly, “I have concluded that the deferral requested by the Philippines is not warranted and that the investigation should resume as quickly as possible.”

Last July 4, the Manlaban sa EJK, an alliance of lawyers, judges, legal practitioners and law students, said Duterte’s successor, Ferdinand “Bongbong” Marcos Jr. should cooperate with the ICC investigation, saying that this would achieve a “high level of accountability.”

However, Marcos, who said in January this year that he would bar ICC prosecutors from coming to the Philippines, said the government has no intention of rejoining the ICC.

“No, the Philippines has no intention of rejoining the ICC,” the president said in a brief interview with reporters on the sidelines of his visit to the Pasig City Sports Complex vaccination site.

“We’re saying that there is already an investigation going on here and it’s continuing, so why would there be one like that [in the ICC]?” he pointed out.

He said the government was already crafting the proper response to the tribunal’s invitation to submit “observations” as The Hague-based court seeks to resume its investigation of alleged violations in the crackdown on illegal drugs.

But the victims’ families said they did not gain any support or got any result from the investigations conducted by the police on the deaths of their loved ones: “Never did they talk to us about the development of the investigation, that is, if they are really conducting an investigation.” 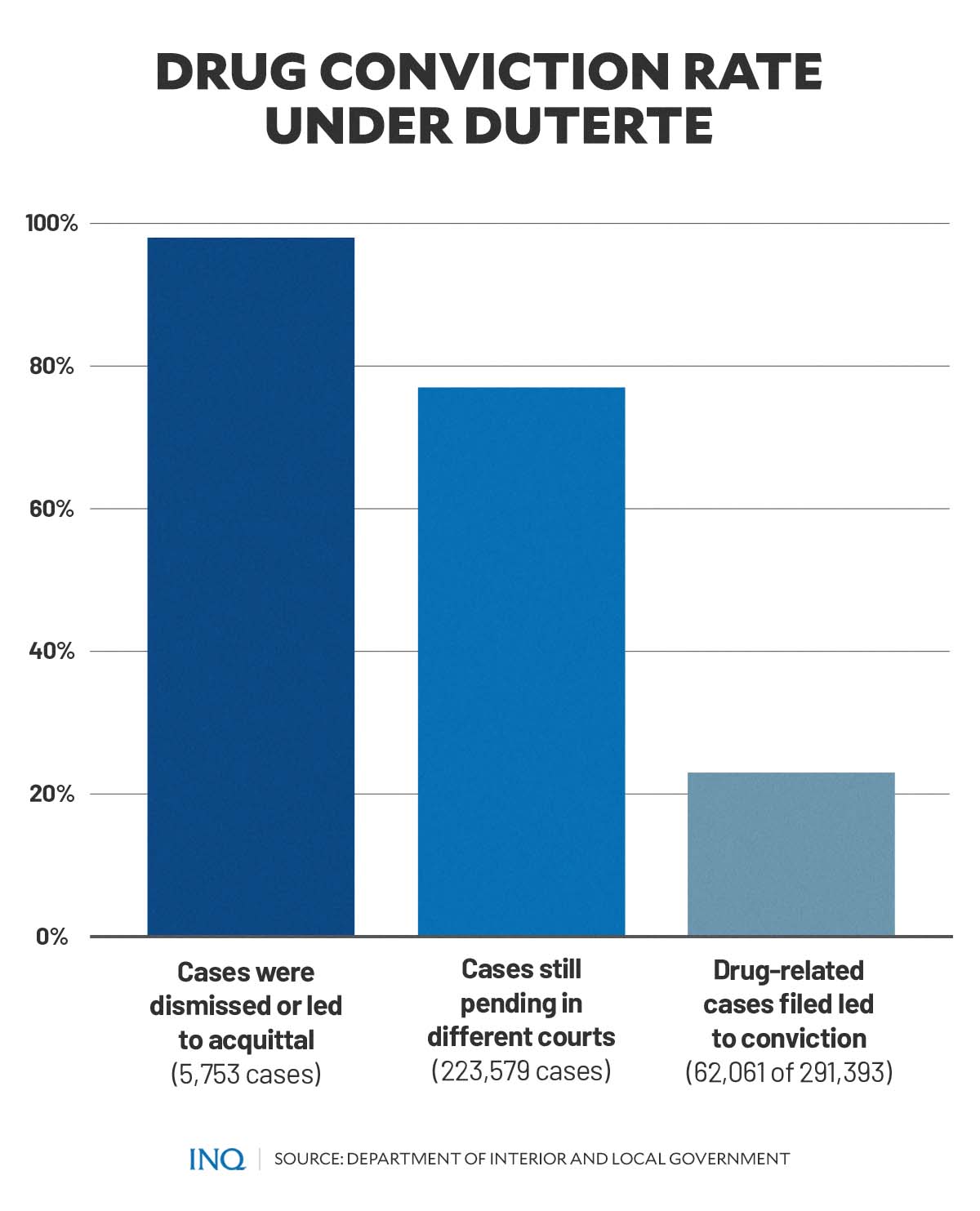 Last month, the Department of the Interior and Local Government (DILG) and the Department of Justice (DOJ) ordered a review of the qualifications of police investigators in the country, citing the dismal conviction rate of crime suspects arrested.

The DILG said that based on data from 2016 to July 2022, Local Government Secretary Benhur Abalos said that only 21 percent—or 62,061 of the 291,393— drug-related cases led to a conviction. Most of these cases remained pending in different courts, while the rest were dismissed or acquitted. 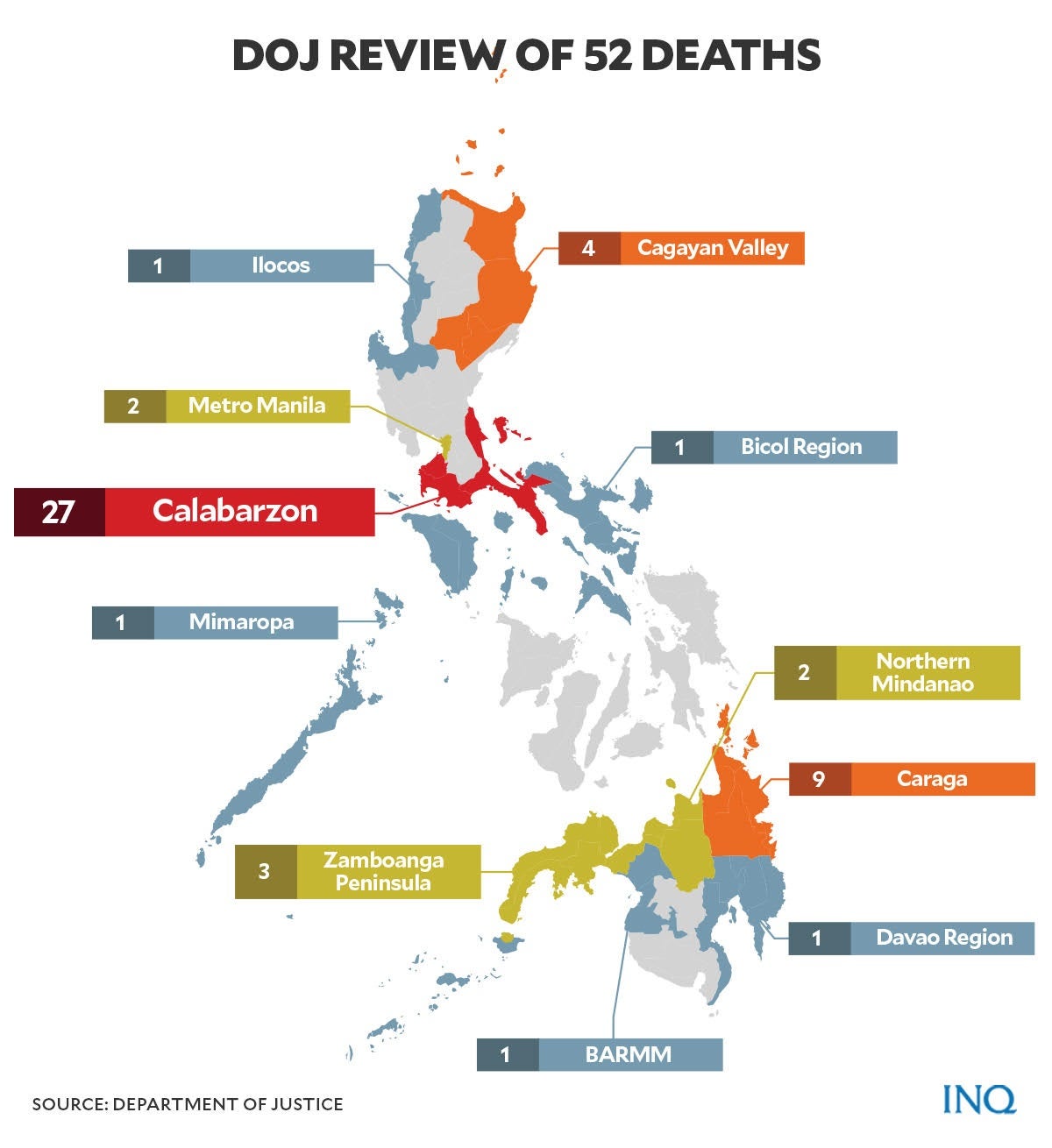 In its review of anti-drug killings last year, the DOJ revealed that most took place in the following regions: