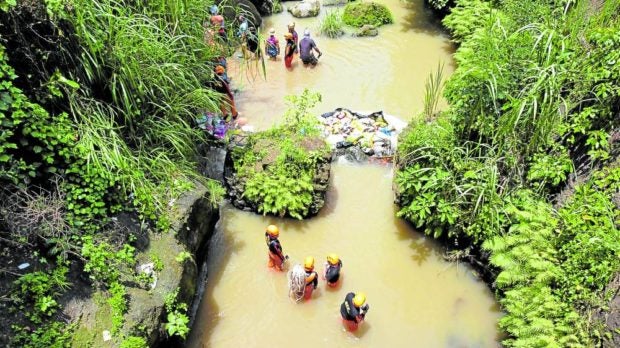 SEARCH AND RETRIEVAL Rescuers search along a section of Imus River on Wednesday to find the bodies of seven teenagers after an old steel bridge collapsed on Tuesday night at Barangay Sampaloc 4 in Dasmariñas City, Cavite. Six bodies were retrieved on Wednesday while the eighth fatality was recovered on Thursday. —REM ZAMORA

LUCENA CITY – Saddened by the deaths of eight teenagers last week after the collapse of an old steel bridge in Dasmariñas City, Cavite Gov. Jonvic Remulla on Monday (Aug. 1) ordered the immediate demolition of all condemned structures in the province.

“I am ordering the Provincial Engineers Office to convene all the municipal and city engineers to provide an accounting of all condemned structures under their jurisdiction for dismantling with the utmost priority,” Remulla said in a Facebook post.

The governor said the antiquated suspended steel bridge should have been long demolished if not for the COVID-19 pandemic.

Remulla said eight families were now grieving the deaths of their loved ones.

He added: “Let us learn our lessons. Let us be better because of our shortcomings and mistakes.”

On July 26 at around 9 p.m., 13 youngsters went to the old bridge in Barangay Sampaloc 4 in the city.

The structure suddenly collapsed and sent them falling into the river below. Five were immediately rescued and taken to the hospital.

One of the teenagers was found dead on the same night. The next day, the bodies of six more teens were recovered in the river.

The eighth fatality was found in the afternoon of July 28.

Armando Movido, village chief of Sampaloc 4, said the bridge was built in 1945 and had long been closed for public use due to safety concerns.

However, the structure had become a favorite spot for locals, especially the youth, who wanted to spend their idle time, he said. INQ