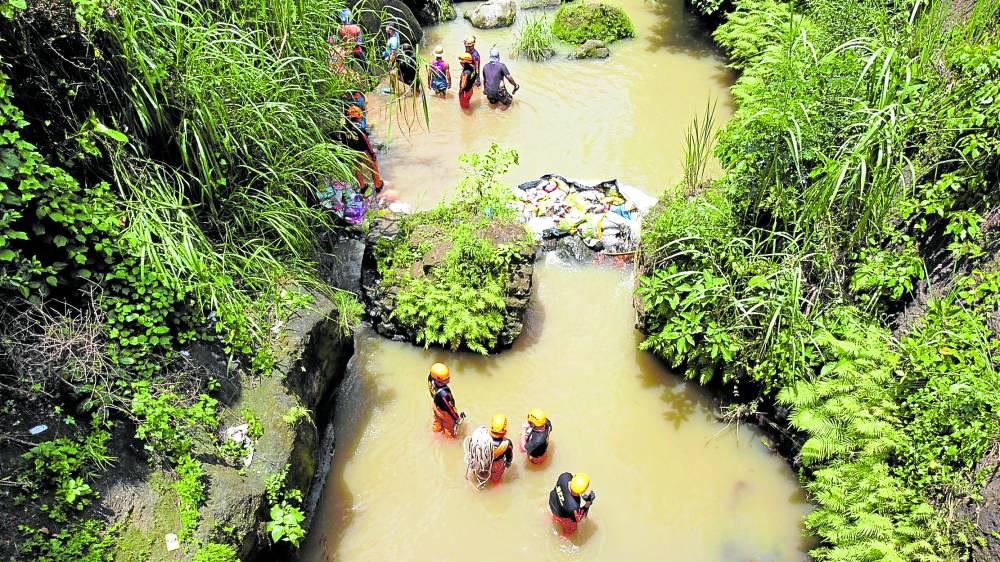 SEARCH AND RETRIEVAL Rescuers search along a section of Imus River on Wednesday to find the bodies of seven teenagers after an old steel bridge collapsed on Tuesday night at Barangay Sampaloc 4 in Dasmariñas City, Cavite. Six bodies were retrieved on Wednesday while the eighth fatality was recovered on Thursday. —REM ZAMORA

A fun gathering for 13 youngsters on an old steel bridge in Dasmariñas City, Cavite province, turned into a tragedy when the structure collapsed and sent them falling into the Imus River in Barangay Sampaloc 4 on Tuesday night.

Eight of them died in the accident, police reported Thursday.

Police said at least 13 teenagers were on the bridge when the structure collapsed at 9 p.m. Tuesday. They fell from a height of 10.6 meters, into the river below. One of them, John Michael Beltran, 17, was found dead on the same night.

On Wednesday, the bodies of six more teens were recovered in the river. The eighth fatality was found on Thursday afternoon.

A report from the regional police office in Calabarzon (Cavite, Laguna, Batangas, Rizal and Quezon) on Thursday identified the other fatalities as Jasper Uy, 15; Angeline Villanueva, 17; Wally Reneda, 17; John Lester Wee, 15; Haslen Vinas, 15; Jerico Batin, 13; and Cyrus Lagrimas, 15. They were all residents of Sampaloc 4.

Several volunteers from neighboring villages assisted rescuers in finding the bodies from the deeper portions of the river, most of whom were recovered only on Wednesday, from the afternoon until night.

Reports from rescuers and retrieval teams said the fatalities were pinned down by concrete slabs and steel from the collapsed bridge. Authorities had to use backhoes and other heavy equipment to remove the rubble and retrieve the bodies.

In a telephone interview on Thursday, Armando Movido, village chief of Sampaloc 4, said the bridge was built in 1945 and had long been closed for public use due to safety concerns.

However, the structure had become a favorite spot for locals, especially the youth, who wanted to spend their idle time, he said.

The area is often referred to as “Tabing Ilog” (riverside) by residents, he added.

Before the accident, a village watchman (“barangay tanod”) ordered the teenagers to stay out of the bridge, Movido said.

“But apparently, they returned after the tanod left them to continue his patrol in other parts of the village. Then the tragedy happened,” he said.