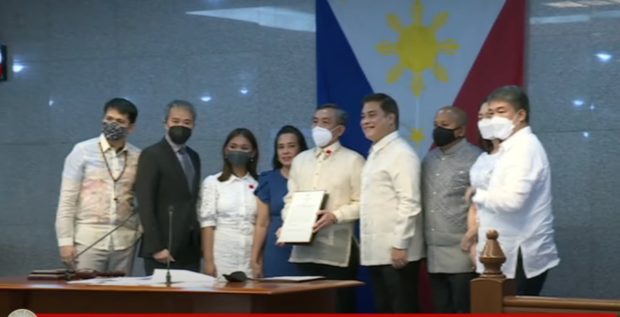 Senators elect Retired Lt. Gen. Roberto Ancan as Senate sergeant-at-arms on Monday, August 1, 2022. This screenshot was taken after he took his oath for the post. Screenshot from Senate of the Philippines livestream

MANILA, Philippines — Retired Lt. Gen. Roberto Ancan was elected as sergeant-at-arms of the Senate on Monday.

“We need someone who can protect not only the 24 senators elected by the people but also the 1,436 Senate employees and all who visit the Senate—Filipino or not,” dela Rosa said in nominating Ancan.

“We need someone who is brave. It is my honor to nominate for the position of Senate sergeant-at-arms one of the bravest men I have ever had the privilege of knowing and working with,” added dela Rosa, a former chief of the Philippine National Police.

Dela Rosa even said the post Ancan has occupied as well as the awards the retired military official has received “hardly do him justice.”

“As we share and listen to his stories, we understand that admiring him is simply not enough. We see him for the man that he is,” he said.

“He is a man who is selfless and brave or, more precisely, one who is brave because he is selfless… To say that he will fulfill his duties is an understatement for I know that he will go above and beyond his function as he has always done,” he also said.

Dela Rosa then recalled in his speech Ancan’s bravery – that the former military man took a bullet for him while on their way to an area allegedly attacked by the New People’s Army.

Back then, dela Rosa was the police provincial director of Compostela Valley.

“Sabi ko sa kanya, ‘I don’t know how to thank you for taking the bullet for me’,” the senator said.

“Literally and figuratively, General Ancan took a bullet for me. Ganun siya kagaling at katapang na official,” he added.