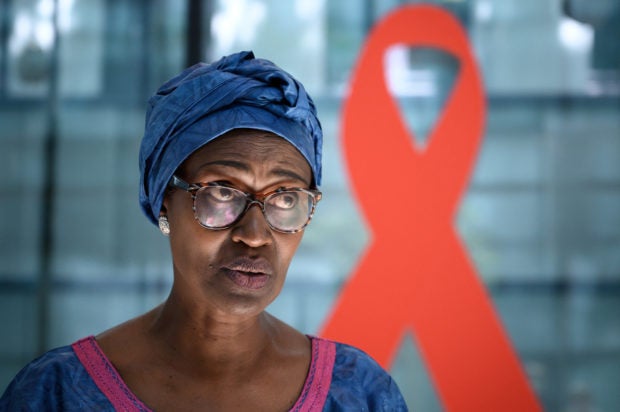 UNAIDS Executive Director Winnie Byanyima answers to AFP on July 3, 2020 in Geneva during an interview ahead of the publication by the organization of its annual report of AIDS and HIV in the world amid the COVID-19 outbreak, caused by the novel coronavirus. AFP

WASHINGTON — The global fight against HIV has stalled from shrinking resources due to Covid-19 and other crises, according to a new report presented at the International AIDS Conference in Montreal, Canada.

Across the world, new HIV infections fell just 3.6 percent between 2020 and 2021, the smallest annual drop since 2016, said the UNAIDS report, titled “In Danger.”

Some 1.5 million new infections occurred last year –- more than a million over global targets of fighting the virus.

“The response to the AIDS pandemic has been derailed by global crises from the colliding pandemics of HIV and Covid, to the war in Ukraine and the resulting global economic crisis,” UNAIDS executive director Winnie Byanyima told reporters.

Bright spots included western and central Africa — the latter driven largely by Nigeria — and the Caribbean.

“Covid-19 and other instabilities have disrupted health services in much of the world, and millions of students have been out of school, increasing their HIV vulnerability,” the report said.

Young women and adolescent girls were disproportionately impacted, with a new infection occurring in this population every two minutes.

Sub-Saharan Africa still accounts for the majority of new infections — 59 percent in 2021 — but that proportion is decreasing as the decline in new cases slows in the rest of the world.

The report comes as high-income countries are cutting back aid.

In 2021, international resources available for HIV were six percent lower than in 2010, with bilateral assistance from the United States down 57 percent over the past decade.

The UN says the HIV response in low- and middle-income countries is $8 billion short of the amount needed by 2025.

Anthony Fauci, the United States’ top infectious disease official, said he was worried that fatigue over HIV was holding back resource allocation.

“When you have the disease that we have been addressing as a community, now over 40 years, even that alone is a tough sell to keep the enthusiasm up,” he said.

With Covid and monkeypox added to the mix, “people are exhausted with epidemics and pandemics, so I think our challenge is we have to fight twice as hard to get HIV back on the radar screen,” he added.

Andriy Klepikov, executive director of the Alliance for Public Health, an AIDS advocacy group in Ukraine, called for special attention to his country in light of the invasion by Russia.

“Over 100,000 people living with HIV are actually living in areas directly affected by the war,” he said, stressing the need for more funds from the United States’ PEPFAR program for HIV as well as from UNAIDS.

Seventy percent of cases globally were reported in key populations: sex workers and their clients, men who have sex with men, people who inject drugs, and transgender people.

The report also called attention to racial inequality as an exacerbator of HIV risks.

In the United Kingdom and United States of America, Black people lag white people in declines in new infections. In Australia, Canada and the United States, HIV acquisition rates are higher in Indigenous communities.

The report also showed that access to life-saving treatments is faltering, growing by its slowest rate in over a decade.

Three-quarters of all people living with HIV had access to antiretroviral treatments, but 10 million people do not.

The rate of global new infections has declined since peaking in the mid-1990s, but there is far to go in order to achieve the global goal of ending AIDS by 2030.

“We can end AIDS by 2030, but the curve will not bend by itself,” said Byanyima, urging countries to heed the call to action.

Oldest patient yet cured of HIV after stem cell transplant—researchers