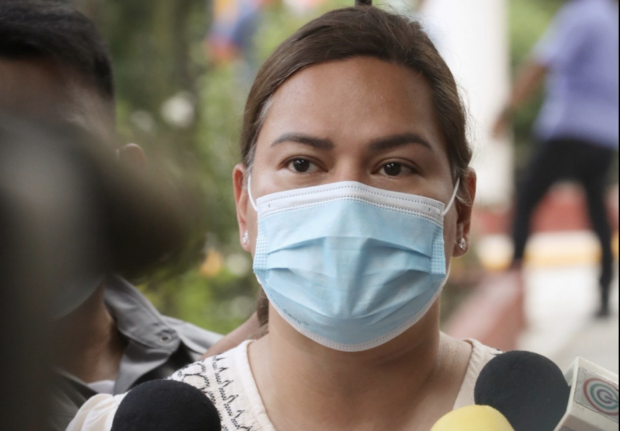 MANILA, Philippines — The word war between Vice President Sara Duterte and the House of Representatives’ Makabayan bloc rages as the former lobbed fresh barbs on the militant group on Monday.

In a statement, Duterte maintained that the Makabayan bloc has ties with the Communist Party of the Philippines and the New People’s Army (CPP-NPA), and saying so is “not red-tagging or terror-tagging.”

Duterte claimed the Makabayan bloc has recruited many students to join the communist movement, which she said would not win.

(How many dreams and future of the youth has the Makabayan bloc allowed to be destroyed over the years? How many children have been killed as NPA?)

(Speaking about the relationship of the Makabayan bloc and the NPA, CPP, and NDFP (National Democratic Front of the Philippines) is not terror-tagging or red-tagging — this is just speaking up the truth.)

Duterte also said she always has time to answer the Makabayan bloc’s remarks, saying that reading the group’s “hypocritical and dramatically rehashed statements” is a way for her to de-stress from her work.

“The laugh that I get reading Makabayan bloc’s hypocritical and dramatically rehashed statements — while thinking about how the Filipino people rejected the bid of Bayan Muna and two other Makabayan bloc party-list groups to infiltrate Congress once again and legitimize their existence while pretending that we do not know about their ‘love affair’ with the NPA, the NDFP, and the CPP — is a way to de-stress from all the challenges the Department of Education and the government need to address without the help of Makabayan bloc, of course,” the Vice President said.

Duterte was responding to the Makabayan bloc’s statement, saying the Vice President, who sits concurrently as the Education Secretary, “should be very busy at this point preparing for the resumption of face-to-face classes.”

“We hope VP Duterte will devote more time fleshing out her supposed advocacy in support of IPs instead of red-tagging MAKABAYAN bloc and engaging in all sorts of fallacious rejoinders,” the group said in an earlier statement.

“If indeed she stands squarely with and among the Lumad, the issue with her Sona outfit would not have led to a massive public backlash. She would not have to go [to] lengths explaining her advocacy, insulting the grief of a mother and maligning real advocates of the Lumad,” it added.

The word war between Duterte and the Makabayan bloc erupted after the latter criticized the Vice President’s traditional Bagobo Tagabawa dress attire during the first State of the Nation Address of President Ferdinand “Bongbong” Marcos Jr. but red-tagged Lumad students and teachers.

Duterte hit back by saying Makabayan bloc was “desperately spinning things around as they scramble to make sense in a world that has already rendered them inconsequential.”

She also said that Lumad schools were shut down in 2019 because the Department of Education (DepEd) found that the schools failed to fill in the education gap for learners “except maybe for subjects dedicated to the indoctrination of the children by the volunteer teachers whose real assignments were to groom the children and prepare them to join the armed terrorism of the NPA.”

In 2019, DepEd shut down the private schools owned and operated by the Salugpongan Ta Tana Igkanogon Community Learning Center Inc. because they allegedly did not comply with curriculum requirements, and brought students away from their homes without their parents’ consent, and had unlicensed teachers.

In response to this, the Makabayan bloc said the schools were “shut down through a combination of sheer intimidation, state terror and denial of due process, and not because of alleged non-compliance and imagined links to communist rebels.”

It said it is not true that the schools lacked permits and documents, as school administrators and coordinators dutifully submitted the requirements for the permit-to-operate application for SY 2019-2020 from the last week of September 2018 to the first week of October 2018.

“The DepEd’s suspension order of Salugpungan schools in July 2019 was based merely on a patently false red-tagging report by Hermogenes Esperon Jr., former vice chair of the NTF-ELCAC. The report was bereft of any factual basis. DepEd officials did not even set foot in any of the 54 campuses which were ordered shut down, hence the lack of any credibility to press on the allegations against Salugpungan schools,” the Makabayan bloc said.

The group added that no Lumad school is currently operating, “denying over a thousand Lumad kids their right to education.”

“That is why it is baffling for the Vice President and DepEd secretary to insist on justifying the closure of Lumad schools instead of opening channels for the resumption of the schools’ operations,” it said.