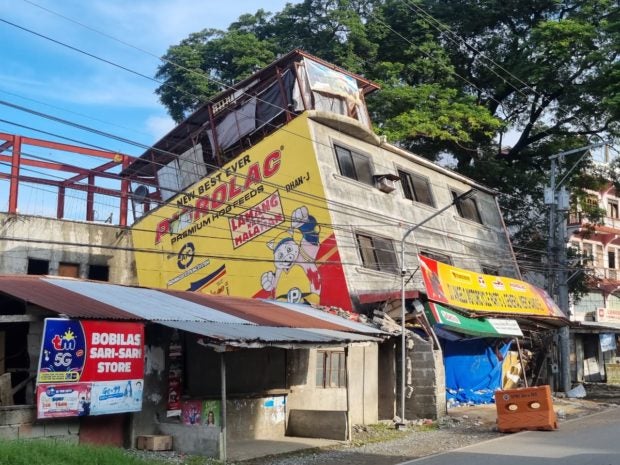 Most of the damage was recorded in the Ilocos region with P393.1 million, followed by Cordillera Administrative Region (CAR) with P12.5 million, the NDRRMC said in its report.

Ilocos Sur had an estimated P52.9-million damage to roads, bridges, and government buildings, although all the national roads and bridges remained accessible.

The Department of Agriculture has reported P13.9-million losses to infrastructure, machinery, and equipment, while the National Irrigation Administration has reported P4.5-million damage.

A total of 21,890 houses were damaged in the regions of Ilocos, CAR, Cagayan Valley, and the National Capital Region, the NDRRMC said.

The death toll has remained at 10, while the number of injured people has also increased to 375, with 355 coming from CAR.

The earthquake has displaced some 34,291 people, with more than 3,800 currently staying in 42 evacuation centers, the NDRRMC said.

Twenty-seven areas have been placed under a state of calamity after Wednesday’s earthquake.

The Philippine Institute of Volcanology and Seismology said on Sunday that it has recorded 1,786 aftershocks ranging from magnitude 1.4 to 5.0 since Wednesday, with 586 of these plotted, or detected by at least three monitoring stations.

Save the cultural properties

Sen. Juan Edgardo Angara on Sunday said the government may use a special fund earmarked for “cultural properties” to bankroll the repair of historical landmarks and structures that were damaged by the earthquake.

Among the centuries-old structures that were partly destroyed were the Santa Catalina de Alejandria Church and the San Lorenzo Ruiz Shrine, both in Abra province, and the Vigan Cathedral and the historic Bantay Bell Tower in Vigan City, Ilocos Sur province.

Heritage houses, including the famous Syquia House in Vigan, were also not spared from the strong tremor.

“These historical sites are more than just landmarks and tourist attractions, but form part of our country’s rich culture and heritage,” Angara said in a statement.

“These structures offer us a glimpse into the country’s past and should be preserved for future generations,” he noted.

The rehabilitation of the damaged buildings and churches, the senator said, should include improvements to make these structures compliant with the Building Code.

“There should be no letup in the effort to provide assistance to the families affected by the calamity, including the rebuilding of their homes, so that they can return to their normal lives as early as possible,” he added.

According to the senator, the government should access the endowment fund created by Republic Act No. 10066, or the National Cultural Heritage Act, which he principally authored, to finance the restoration and rehabilitation programs.

The law, he noted, stipulated that “all cultural properties declared as important cultural property may also receive government funding for its protection, conservation and restoration.”