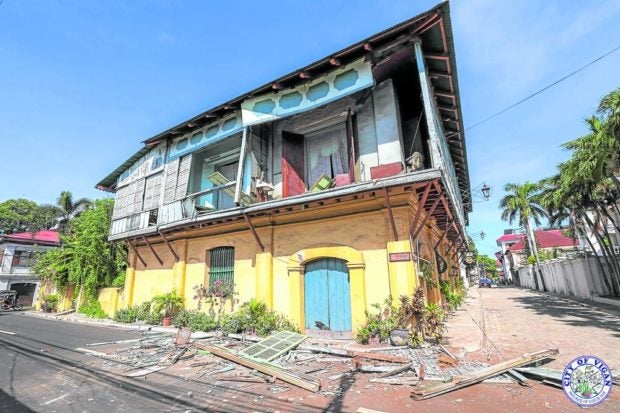 CHIPPED AND CRACKED | Strong tremors from the earthquake that shook the northern parts of Luzon on Wednesday left a trail of damage on the country’s heritage structures. Those now in need of repair include a Spanish colonial house (top) in the historic City of Vigan, a World Heritage Site, and an Aglipayan church (below) in La Paz town in Abra, in these pictures obtained from social media. —PHOTOS FROM REUTERS AND Vigan City PH Facebook page

LAOAG CITY, Ilocos Norte, Philippines — A 16th-century cathedral at the heart of Vigan’s heritage district and an ancient watchtower that looms over the city are among the important heritage sites that sustained damage as a magnitude-7 earthquake rocked Ilocos Region, the Cordilleras and other parts of Luzon on Wednesday.

A survey of the impact of the morning tremors felt all the way to Metro Manila showed the extent of the destruction not only on life and property, but also on some of the country’s cultural assets in the North.

The Vigan Cathedral, also known as the Metropolitan Cathedral of the Conversion of St. Paul, in Ilocos Sur’s capital city, was closed off to visitors after parts of the facade crumbled.

The decision to shutter one of the country’s oldest Augustinian churches was made following a damage assessment, according to parish priest Gary Noel Formoso.

“We will wait for the pronouncement from the structural engineers if it is already safe to use for our Eucharistic celebration,” he said in an advisory on Facebook.

Built in 1574, the Baroque church is the seat of the Nueva Segovia Diocese. Its design “has been modified by Ilocanos to strengthen the structure against earthquakes,” according to the city government.

The cathedral is located at Calle Crisologo in the historic city of Vigan, a World Heritage Site.

World Heritage Sites are landmarks that are legally protected by international convention and designated by the United Nations Educational, Scientific and Cultural Organization (Unesco) for having cultural, historical or scientific significance. 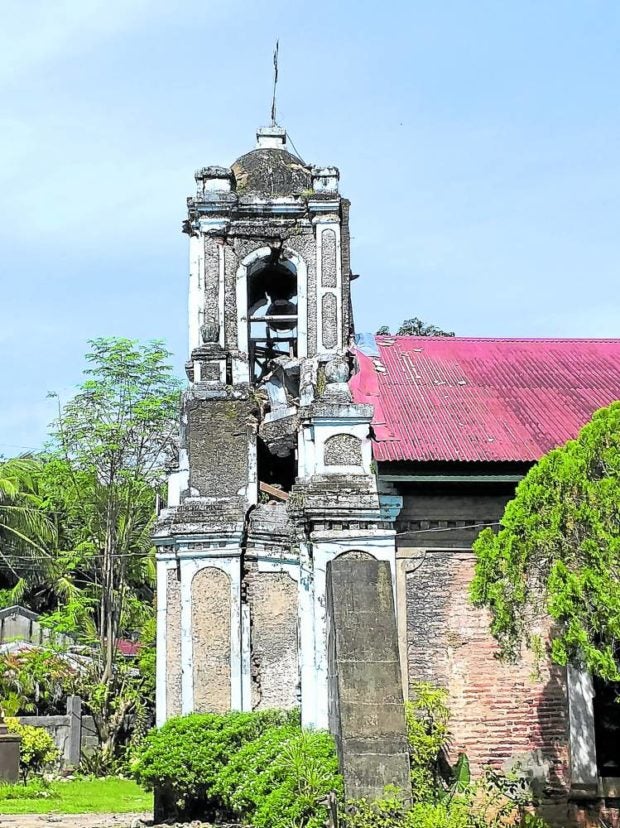 According to Unesco, Vigan is the “best-preserved example of a planned Spanish colonial town in Asia.”

Another architectural casualty of Wednesday’s quake was the 431-year-old Bantay Watchtower, a 10-minute ride from Vigan.

A video taken by Edison Adducul showed portions of the tower falling off.

Built in 1591, Bantay is a popular tourist destination in Ilocos Sur and has been used as a filming location for movies, the most notable being “Ang Panday,” which starred the late Fernando Poe Jr.

But it also has historical importance, with Vigan tourism websites touting it as the “people’s watchtower” for being “part of the city’s defense that [helped] in alerting it against possible enemies.”

Besides the Vigan Cathedral and the Bantay Watchtower, Vigan officials took stock of the damage to other cultural sites and heritage churches in the city immediately after the quake.

Vigan Mayor Jose “Bonito” Singson Jr. said the earthquake had caused “serious damage” to buildings and infrastructure, prompting the city to evacuate some of its residents.

Major cracks were also found at the College of Fine Arts Building of the University of Northern Philippines.

According to Laoag’s official website, the tower, believed to have been built after an earthquake in 1707, “sinks into the ground at a rate of an inch a year.”

“It has survived several minor earthquakes since its construction, causing scholars to label it an Earthquake Baroque-style structure,” it added.

In Ilocos Norte’s Badoc town, chunks of masonry littered the street after falling off the old convent of the St. John Baptist Minor Basilica.

The National Museum of the Philippines said it was committed to helping local governments in the rehabilitation and restoration efforts for damaged heritage structures.

“We appeal for calm and solidarity in this time of emergency and rest assured [we] will remain a reliable partner in rebuilding and preserving our cultural heritage,” it said in a statement.

Meanwhile, several parts of the country experienced power outages following the earthquake but power remained stable in the rest of the archipelago, according to the Department of Energy (DOE).

The National Grid Corp. of the Philippines said it was able to restore loads affected by the quake in La Union as the Bacnotan-Bulala 69 kV line went back online.

The entire coverage area of Mountain Province Electric Cooperative Inc. was affected, including parts of Tinglayan, Kalinga and parts of Cervantes and Quirino, Ilocos Sur.