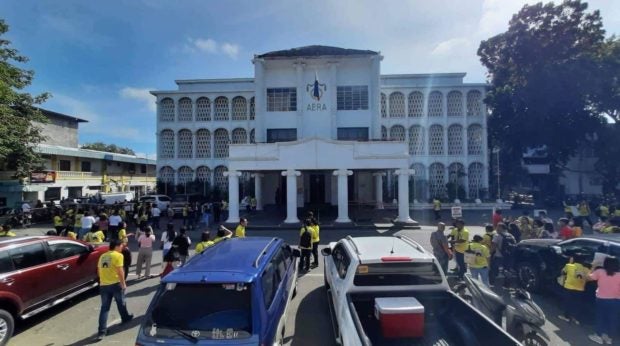 People rush out of the Abra Capitol during the magnitude 7 earthquake that stuck in the morning on Wednesday, July 27, 2022. (Photo from the Facebook page of the Abra provincial government)

MANILA, Philippines — The Department of Tourism directed its regional offices on Wednesday to help local government units (LGUs) assess the damage caused by the magnitude 7 Abra earthquake on cultural and heritage sites.

In a statement, Tourism Secretary Christina Frasco said she had ordered the Tourism Infrastructure Enterprise Zone Authority (TIEZA) to explore the assistance it can extend to LGUs.

“We will request TIEZA to prioritize assessment of the cultural treasures affected by the recent earthquake recognizing the need to protect and sustain our heritage and cultural treasures for the benefit and welfare of our future generations,” Frasco said.

According to the DOT, at least two churches that had been declared national cultural treasures by the National Museum of the Philippines have been damaged by the earthquake, along with some heritage and ancestral houses.

“My concern and sympathy are one with those who have been affected by the recent earthquake in Northern Luzon. The Department will extend whatever help it can to tourism stakeholders and establishments that have been directly affected by this incident. I have requested the DOT Regional offices in Northern Luzon to continue with the assessment of the extent of the damage and to immediately submit the report for our appropriate actions and assistance,” Frasco said.

“Our resilience as a nation has already been tried and tested in the past. I am certain that this can be strengthened by the essential collaboration between our national agencies, local governments, and crucial stakeholders as we conquer our challenges,” she added.

Following are some of the structures that were damaged.

The epicenter of the earthquake was recorded in Lagangilang, Abra. So the province sustained notable damage to tourist sites, including the Santa Catalina de Alexandria Church, a 19th-century baroque structure declared by the National Museum in 2001 as a national cultural treasure.

Also heavily damaged was the San Lorenzo Ruiz Shrine, another national cultural treasure, in Bangued. Built in 1803, the shrine is the oldest and largest in the Cordilleras.

The Heritage City of Vigan recorded some damage in popular tourist destinations:

In San Juan, the St. John The Baptist Church had a damage façade and ceiling.

The Lafayette Luxury Suites Hotel and Crown Legacy got minor cracks. Both hotels will temporarily stop accepting visitors to ensure the safety of guests and personnel.

Properties under the TIEZA were also damaged.

In Ifugao, the ceiling of the Banaue Hotel and Youth Hostel partially collapsed.

In Bauko, Mountain Province, the ceiling in the fireplace and lobby area of the historic Mount Data Hotel collapsed, and several of its decorations were also damaged.

Meanwhile, no tourists were reported injured.

Those who are planning to travel to Northern Luzon are advised to practice extra precautions.