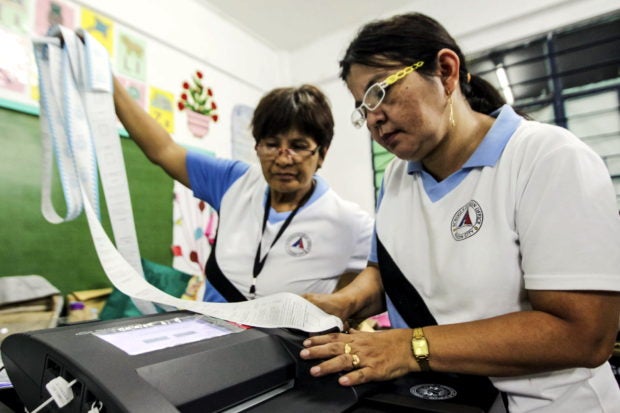 MANILA, Philippines — Teachers who served as poll watchers in the May 9 general elections criticized the government as “hypocritical” and “insensitive” to their plight after President Ferdinand Marcos Jr. vetoed last week the bill exempting from taxes the honoraria, allowances, and other benefits of election workers.

Grace Abellar, a teacher from Kabugwason Elementary School in Bacolod City, recalled how they had to wake up as early as 3 a.m. just to prepare the polling precincts to ensure that voting would go smoothly.

“Teachers wanted to serve in the election but the government is insensitive to our situation,” Abellar said at a press briefing organized by the Alliance of Concerned Teachers (ACT) on Sunday.

“They were all praises for teachers during the election season and [they] even called us heroes but they still milked our meager allowance dry with the 20-percent [withholding] tax,” she added.

Before the bill was passed by the 18th Congress, ACT Teachers party list had lobbied for its passage at the House of Representatives for the past four years.

Another teacher, Rizza Bantillan of ACT Manila, said that Marcos’ decision to veto the bill was “saddening, disappointing and demoralizing.”

“It [would have been] a huge thing for us to receive [our] honoraria and allowances in full because our task during the election was no joke,” she said.

With the barangay elections scheduled in December, the lingering question, according to her, was this: Would teachers still be willing to serve?

In his veto message to Congress last week, the President said that the reconciled Senate Bill No. 2520 and House Bill (HB) No. 9652 was “inequitable to other persons performing similar activities or services.” He also cited revenue losses.

A Department of Education supervisor will get P5,000 while the support staff and medical personnel will receive P3,000.

These are on top of a travel allowance of P2,000, a communication allowance of P1,500, an “anti-COVID-19 allowance” of P500, and a minimum service credit of five days.

“President Marcos insulted the movement and calls of the teachers after vetoing the said bill. It’s a negligence of the hard work and sacrifices of teachers who chose to serve in the elections despite the pandemic,” said ACT chair Vladimer Quetua.

ACT Teachers Rep. France Castro said they were planning to talk to leaders at the Senate and House of Representatives about a possible legislative override of the veto.

For a bill or its vetoed items to become law, these need to be passed by a vote of two-thirds of the members of both chambers. Under the law, the House and the Senate will vote separately.

With an override of the President’s veto an unlikely scenario at the House of Representatives due to a “supermajority,” one of HB 9652’s principal authors said he would instead push for a new measure providing election workers with incentives.

Albay Rep. Joey Salceda told the Inquirer that he would file on Monday a bill that “enrolls elections workers for risk insurance for risks incurred during election service so that we keep the spirit of the proposal without disrupting the tax system.”

According to him, there was no legal implication in Marcos’ veto of a measure that had been certified as a priority by his predecessor.

“The President reserves the right to exercise his inherent powers as he sees fit, as long as [it is] within the bounds of the law. In this case, he deemed it necessary to veto the tax exemption,” Salceda said.

“I was for this law because it provided a direct incentive for the disproportionate risks election workers take during poll work,” he said. “The administration does not want to disturb the tax system to compensate for this risk. There is merit to that reasoning.”

Earlier, Salceda had calculated that the tax exemption would cost the government an annualized revenue loss of only P138.6 million which he called “very reasonable, given the job well done.”

In a radio interview on Sunday, House Deputy Speaker Isidro Ungab said that historically, no legislative override has succeeded, as he also pointed out that the overwhelming number of majority representatives in the 19th Congress would make such an option difficult.