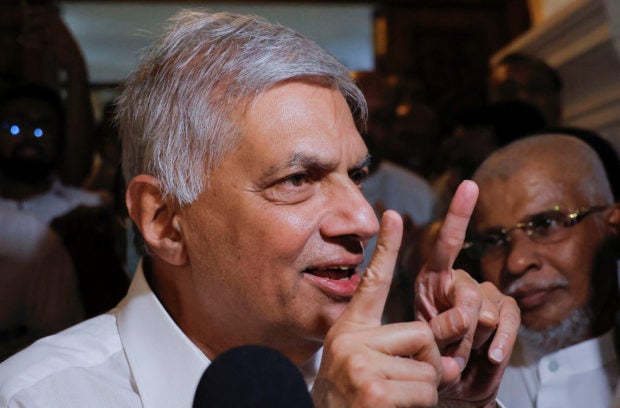 Ranil Wickremesinghe who has been elected as the Eighth Executive President under the Constitution speaks to media as he leaves a Buddhist temple, amid the country’s economic crisis, in Colombo, Sri Lanka July 20, 2022. REUTERS FILE PHOTO

In a meeting Saturday with the influential monks of the Temple of the Tooth in Kandy, one of Buddhism’s most sacred shrines, Wickremesinghe outlined his plans.

“As the president, I wish to start a new journey,” Wickremesinghe was quoted as telling the monks in his first meeting with the powerful Buddhist clergy since taking office.

“I would like to get all the parties together and go on that journey as well as to form an all-party government.”

He has written to all lawmakers asking them to join a unity government.

A former opposition MP, Wickremesinghe, 73, took up the premiership for the sixth time in May after Rajapaksa’s elder brother Mahinda resigned and there were no other takers for the job.

Wickremesinghe went onto become the president after Gotabaya escaped on July 9 when tens of thousands of protesters angry at the economic crisis stormed the presidential palace.

He fled to Singapore from where he resigned five days later and Wickremesinghe became interim president and later won a vote in parliament confirming his ascension.

Since late last year, the country has run out of foreign exchange to finance even the most essential imports.

In April, Sri Lanka defaulted on its $51 billion foreign debt and opened bailout talks with the International Monetary Fund.

Wickremesinghe told monks that the economy would decline further this year with a contraction of 7.0 percent, but expected a recovery next year.

“I am working to re-stabilise this economy and build the economy in such a way that the country can be developed by 2023, 2024.

He said inflation currently running at 60.8 percent could go up further.

After his election as president, Wickremesinghe, while ordering security forces to clear protest sites, has appointed an interim cabinet leaving the door open for others to join.

He has called a new session of parliament from Wednesday and is expected to expand the 18-member cabinet to accommodate members from opposition parties.