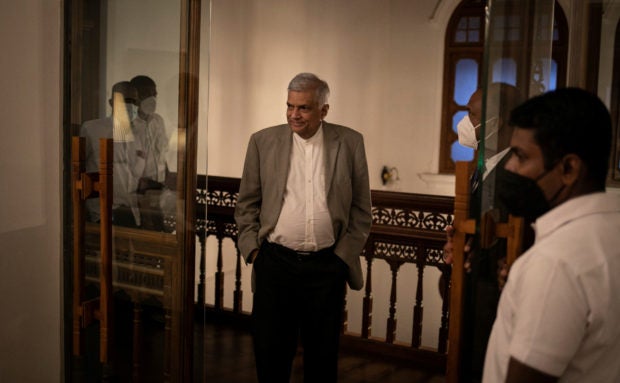 Sri Lanka’s Prime Minister Ranil Wickremesinghe arrives for an interview with Reuters at his office in Colombo, Sri Lanka, May 24, 2022. REUTERS/Adnan Abidi/Files

COLOMBO — Sri Lankan lawmakers voted acting President Ranil Wickremesinghe as the new president on Wednesday, hoping his long experience in government would help pull the country out of a crippling economic and political crisis.

The mood of protesters was muted, with only around 100 people on the steps of the presidential secretariat. Many of the hundreds of thousands on the streets who forced the ouster of previous president Gotabaya Rajapaksa last week had wanted Wickremesinghe gone too, labelling him an ally of the Rajapaksa family.

“We’re shocked. He’s a person handling things in a very cunning way,” protester Damitha Abeyrathne said of Wickremesinghe. “He will start controlling us in a different way. As protesters, we will start our struggle again.”

Chameera Dedduwage, an organizer of previous protests, said one of the goals of the movement was the removal of Rajapaksa, and with that achieved, it “will have to be satisfied with its primary demand”.

“Unlike GR, Ranil is not a populist: he’s known to be a ruthless pragmatist,” Dedduwage said of Rajapaksa, using his initials.

The 225-member parliament gave 134 votes to Wickremesinghe and 82 to the other main candidate, ruling party lawmaker Dullas Alahapperuma. A third candidate, Anura Kumara Dissanayaka, got just three votes, according to the secretary general of parliament.

The win for Wickremesinghe, a six-time prime minister, came despite public anger with the ruling elite after months of severe shortages of fuel, food and medicines.

Wickremesinghe became acting president last week after Rajapaksa fled on a military plane to the Maldives and then took a commercial flight to Singapore.

“Now everyone must come together,” the 73-year-old said after his victory.

Alahapperuma, although more acceptable to the protesters and the opposition, does not have any top-level governance experience in a country with barely any dollars for imports and desperately in need of an IMF bailout.

“I accept the decision of parliament,” he said. “My effort was to support consensus-based policy-making to provide solutions to a deeply suffering population. I believe the space for that still exists.”