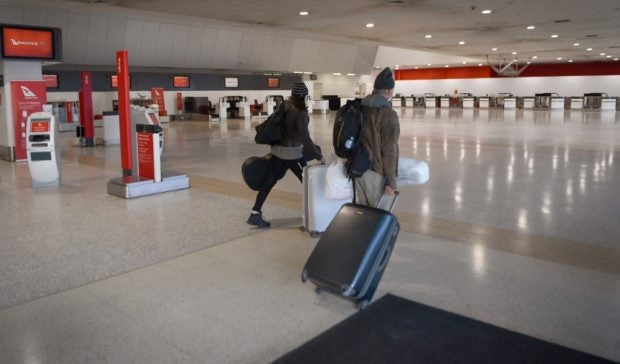 Travellers walk through a deserted Qantas terminal at Melbourne Airport on August 26, 2021 as Australian airline Qantas posted more than 1 billion USD in annual losses, after what it described as a “diabolical” year caused by pandemic travel restrictions. (Photo by William WEST / AFP)

SYDNEY (Reuters) – Australia on Wednesday said it has stepped up protection against foot and mouth disease at its international airports following an outbreak of the disease in Indonesia.

Travellers arriving in Australia from Indonesia will now be asked to walk across sanitation foot mats at airports, the latest measure to ramp up Australia’s biosecurity measures, the government said.

The mats will contain a citric acid solution designed to dislodge any dirt from the sole of the shoe and cover it in the acid.

The move comes after foot and mouth viral fragments were detected in meat goods that came into Australia recently from Indonesia and China, Agriculture Minister Murray Watt said at a news conference.

“We have detected foot and mouth disease and African swine fever viral fragments in a small number of pork products for sale in the Melbourne CBD that were imported from China,” Watt said, adding that these were detected during routine checks.

“In addition to this a passenger travelling from Indonesia has in recent days been intercepted with a beef product that they didn’t declare which tested positive for foot and mouth disease viral fragments,” he added.

These viral fragments are not live and cannot be transmitted, he said.

Foot and mouth disease is a highly contagious animal disease that affects cattle, sheep, goats and pigs but does not pose a threat to humans. Government modelling projects a widespread foot and mouth outbreak in Australia would have an estimated direct economic impact of around A$80 billion ($55.3 billion).

More than 317,000 animals have been infected in 21 Indonesian provinces, largely on the most populated islands of Java and Sumatra, with more than 3,400 animals culled, according to government data.