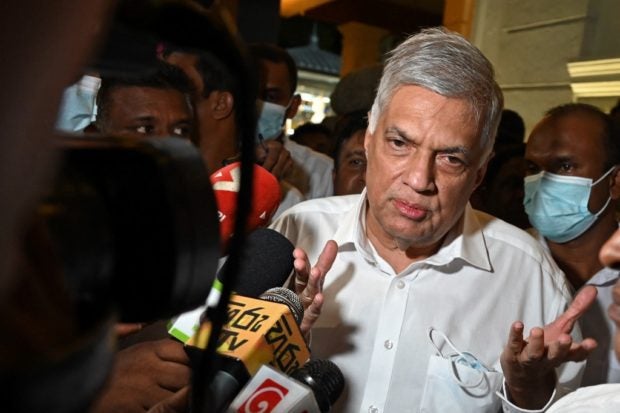 Sri Lanka’s newly elected president Ranil Wickremesinghe addresses the media representatives during his visit at the Gangaramaya Buddhist temple in Colombo on July 20, 2022. – Sri Lanka’s president-elect on July 20 vowed to take tough action against anyone resorting to what he called the undemocratic means that led to his predecessor’s ouster. (Photo by Arun SANKAR / AFP)

COLOMBO — Sri Lanka’s six-time prime minister Ranil Wickremesinghe was sworn in Thursday as president of the crisis-hit South Asian nation, as officials said he was looking to form a unity government to manage the turmoil.

The 73-year-old veteran politician, who was overwhelmingly elected as head of state in a parliamentary vote Wednesday, took his oath of office before Chief Justice Jayantha Jayasuriya, his office said.

Live coverage of the swearing-in at the tightly-guarded parliament complex was cut off just as Wickremesinghe and his wife Maithree walked into the building after reviewing a military parade.

“An investigation was launched to figure out why the broadcast was interrupted,” a top defense official told AFP.

Sri Lanka’s police chief and top military brass stood behind the new president as the oath was administered.

Official sources said he was expected to shortly form a cabinet not exceeding 30 ministers to steer the country out of its worst economic crisis since gaining independence from Britain.

A foreign exchange crisis triggered by the coronavirus pandemic and exacerbated by mismanagement has left Sri Lanka suffering lengthy power blackouts and the country’s 22 million people enduring shortages of fuel, food and medicines for months.

Public anger over the hardships boiled over when tens of thousands of protesters stormed the home of then-president Gotabaya Rajapaksa, forcing him to step down and clearing the way for Wickremesinghe’s election.

Wickremesinghe is widely expected to invite his schoolmate and former public administration minister Dinesh Gunawardena to be the prime minister in the unity government.

But political sources said at least two other candidates were also in the running.

Gunawardena and Wickremesinghe have known each other since the age of three and studied together at the prestigious Royal College of Colombo.

Gunawardena is a trade union leader and represents a small nationalist party allied with the ousted Rajapaksa’s SLPP party.

“There will be a few MPs from the main opposition joining the cabinet,” a source close to Wickremesinghe said, adding that he was keen to ensure a rainbow coalition.

After worshipping at a Buddhist temple on Wednesday following his election, Wickremesinghe vowed to take a tough line against troublemakers trying to disrupt his government.

He made a distinction between peaceful protesters and “troublemakers” resorting to illegal means.

“If you try to topple the government, occupy the president’s office and the prime minister’s office, that is not democracy, it is against the law,” Wickremesinghe said.

“We will deal with them firmly according to the law. We will not allow a minority of protesters to suppress the aspirations of the silent majority clamouring for a change in the political system.”

Protesters who stormed Rajapaksa’s palace and toppled him earlier this month have accused Wickremesinghe of being a proxy of the once-powerful family.

Officials said Wickremesinghe was due to hold his first official meeting with military brass and the police chief at the defense ministry Thursday to discuss the security environment.

Constitutionally, the president is also the minister of defense and the commander-in-chief of the armed forces.

Wickremesinghe, as acting president, had already declared a state of emergency that gives sweeping powers to the military to arrest and detain suspects.