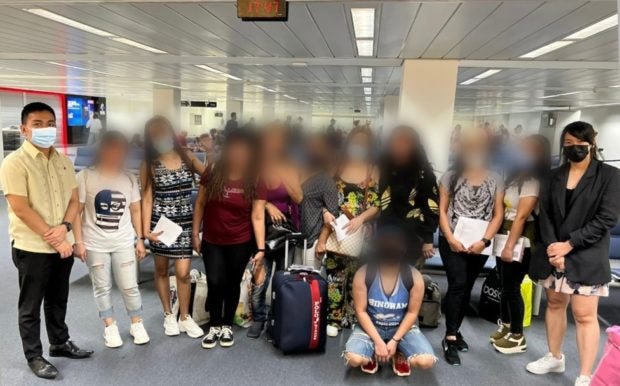 The DFA on Wednesday announced that the repatriates — composed of physically abused workers, sheltered runaways, and detained nationals — were sent home this month after Lebanese authorities cleared them of their “immigration liabilities.”

The Overseas Workers Welfare Administration, upon the repatriates’ arrival, assisted them with their quarantine accommodations and domestic flights back to their respective hometowns.

Following the 14 OFWs’ repatriation, the Philippine Embassy in Lebanon’s shelter occupancy – which accounts for the number of distressed and undocumented Filipinos it accommodates – dipped to 98 percent after it almost reached total capacity during the first quarter of 2022.

It also added: “The Embassy reduced the number of jailed Filipino workers in Lebanon by 70 percent.”

Illegal recruitment bound for Lebanon has been common among OFWs despite the deployment ban of household service workers in the country since 2007, according to the DFA.

It assured, however, that the Embassy will continue to protect the welfare of Filipinos in the Middle Eastern country.

“[The Embassy] prioritizes the provision of legal assistance and their earliest possible repatriation while giving basic supplies, as deemed necessary,” the DFA detailed.

Individual exit clearance endorsements for undocumented and distressed OFWs will also be offered by the Embassy, while psychosocial and legal assistance will be given to victims of abuse.

OWWA to distressed OFWs: We’re here to listen to you