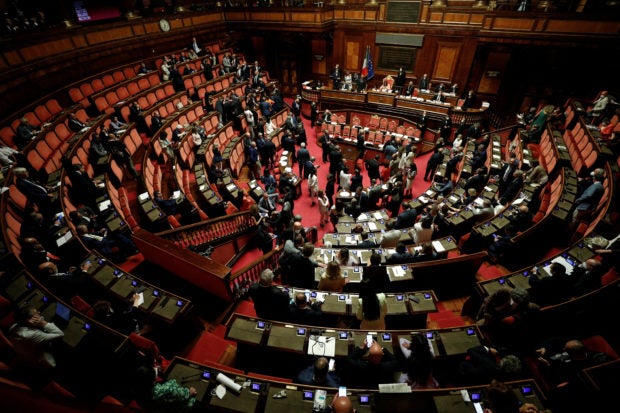 FILE PHOTO: General view of the Senate during a confidence vote for the government after Italian Prime Minister Mario Draghi tendered his resignation last week in the wake of a mutiny by a coalition partner, in Rome, Italy July 20, 2022. REUTERS/Guglielmo Mangiapane

ROME — The party with the most votes in Italy’s center-right coalition will choose the prime minister if the bloc wins the coming election, the alliance said on Wednesday, putting far-right leader Giorgia Meloni in pole position for the top job.

Choosing a nominee for prime minister has sparked tension within the bloc, which includes Matteo Salvini’s League, Silvio Berlusconi’s Forza Italia and Meloni’s Brothers of Italy, currently the most popular party in the coalition.

Italian newspapers have reported that Berlusconi worried that the prospect of Meloni taking power would deter moderate voters, given her party’s post-fascist roots.

However, the deal confirms a traditional rule within the bloc.

“The coalition will propose to the President of the Republic as premier the person indicated by the party with the most votes,” the center-right parties said in a statement after a meeting of their leaders.

Meloni’s group polled just 4% in the 2018 election, but is now seen winning more than 23%, making it Italy’s largest party ahead of the main centre-left group, the Democratic Party (PD).

In the event of victory, Meloni could also indicate someone else from her camp if she wanted.

Under Italy’s election law, 36% of parliamentarians in both the upper and lower houses are elected on a first-past-the-post basis, with the rest chosen by proportional representation based on separate party lists.

This mixed system benefits parties that form alliances to avoid diluting support for their political family.