Pia Cayetano fumes over lapse of vape bill into law 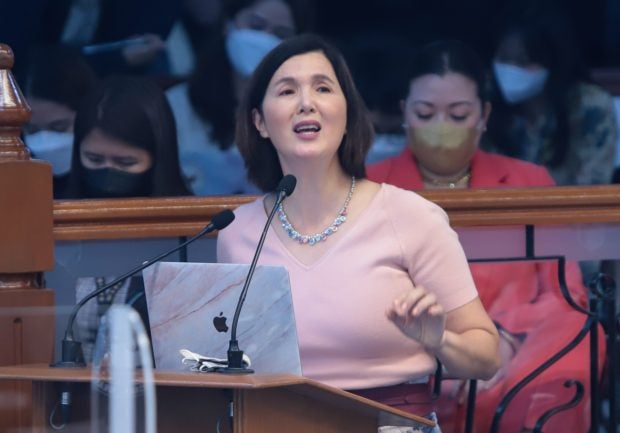 CAYETANO DISMAYED OVER VAPE BILL LAPSING INTO LAW: Senator Pia Cayetano, during the First Regular Session of the 19th Congress on Tuesday, July 26, 2022, expresses dismay over the lapsing into law of the Vape Regulation Bill, which she relentlessly opposed way back in the 18th Congress. (Photo courtesy of Bibo Nueva España/Senate PRIB)

The Vaporized Nicotine and Non-Nicotine Products Regulation Act, submitted by Congress to the Palace during the administration of former President Rodrigo Duterte, aims at lowering the minimum age for buying and using electronic cigarettes and vapes from 21 to 18.

It also transfers the regulatory function of nicotine and non-nicotine products from the Food and Drug Administration to the Department of Trade and Industry.

“Today, the tobacco industry rejoices with the passage of this law. Naloko na naman nila ang taong bayang Pilipino (They have deceived the Filipino people yet again),” Cayetano said in a privilege speech during the first regular session of the Senate in the 19th Congress.

She also cited President Ferdinand “Bongbong” Marcos Jr.’s words during his first State of the Nation Address on Monday, where he promised that science and data would drive his administration’s programs and decisions.

“I thought this means that the vape bill would be vetoed, because the science clearly tells us just how harmful these products are, while medical experts have repeatedly said how the vape bill masquerades as a health measure, as it really pushes for deregulation, not regulation, and harm introduction, not harm reduction,” Cayetano further explained.

READ: Doctors ready to challenge vape bill before SC if it becomes law

An article by Joseph Blaha, M.D., M.P.H. published on the Johns Hopkins Medicine’s website details shocking facts about vaping. Electronic cigarettes produce aerosols from tobacco, nicotine, flavors, and other chemicals, and many of the chemicals in tobacco cigarettes are toxic. E-cigarettes contain unknown chemicals, but vaping is safer than smoking. However, vaping is associated with lung injuries and deaths. Centers for Disease Control and Prevention data indicated 2,807 cases of vaping or e-cigarette-related lung injuries and 68 deaths in February 2020.

Cayetano expressed disappointment with both the 18th Congress and the former President’s failure to reject the measure.

(The former administration’s term has ended, as well as the President who was in charge of deciding whether to veto or pass the measure into law. The decision delayed the transfer of responsibility to the next President, and that is a legal quandary.)

With this development in the vape bill, Cayetano assured the public that a case will be filed before the Supreme Court to question the validity of its lapsing into law.

The Department of Health, the Department of Education and other health experts have previously urged then President Duterte to reject the vape bill as they stressed the harm it may bring to the people, especially the youth.

Has it really lapsed into law?

Cayetano — a known opposing force of the vape bill — pointed out anew that it took about five months for the Congress-approved version of the measure to be submitted to Malacañang, leaving erstwhile President only three working days before his term in office ended.

Considering that the bill lapsed into law under a new administration, Pia’s younger brother Senator Alan Peter Cayetano prodded the upper chamber to determine its position on this matter by reviewing and seeking counsel from its legal department.

“If the advocates of tobacco are going to insist that it is now a law then, it will go to the Senate but I think, we in the Senate have to decide — ano ba ang stand natin?” he said. “Since we have not passed the rules of the Senate for this Congress, may I request that this be one of the topics of the Rules Committee which will review this?”

Senate Minority Leader Koko Pimentel also backed the call to ask for a legal opinion on the issue.

Aside from this measure, the Extended Producer Responsibility Act — which gives companies the responsibility of disposing and recycling their products after it is sold and consumed — has also recently lapsed into law.