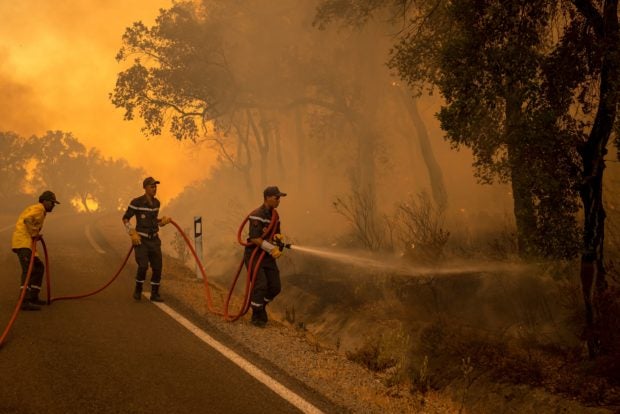 Firefighters battle a forest fire raging near the Moroccan city of Ksar el-Kebir in the Larache region, on July 15, 2022. AFP

RABAT — One volunteer firefighter has been killed and another injured in a forest fire in northern Morocco, where new blazes have broken out after a few days of calm, according to local authorities.

The two victims were helping Monday in operations to extinguish a fire in Tanouate province near Fez and Meknes, local sources told AFP.

The injured volunteer was hospitalized but his life was not in danger.

Firefighting services were working overnight to control the blaze after ensuring the safety of villagers, authorities added.

About 33 hectares (82 acres) of forest have been destroyed in the region.

Several outbreaks of varying magnitude have resumed in recent hours in northern Morocco, particularly in Larache province, which was recently devastated by forest fires that left one dead.

The Moroccan government on Friday released emergency aid of nearly 30 million euros ($31 million) to help victims of forest fires and reduce their impact on agricultural activity and the environment.

Forest fires destroyed more than 10,500 hectares in the north of the kingdom in mid-July.

Morocco, which is experiencing severe drought, has been hit by heatwaves over the past month.