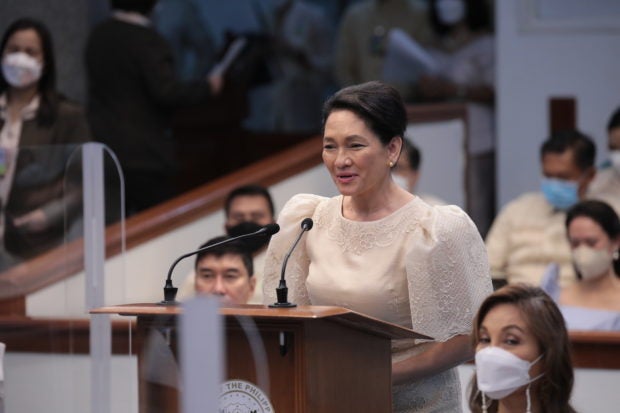 THE MINORITY BLOC: On her 2nd term, Sen. Risa Hontiveros takes the floor and nominated Sen. Aquilino “Koko” Pimentel III as the minority leader of the 19th Congress, Monday, July 25, 2022. Hontiveros has been in the minority bloc during the 17th and 18th Congresses. (Voltaire F. Domingo/Senate PRIB)

(For me, yesterday’s speech was a bit like window shopping. Look at what will appeal to people’s tastes first. However, now is not the time to browse big-ticket items.)

(We cannot afford to waste time during a pandemic, so I’m praying that this will not be a case of overpromising or underdelivering.)

The senator further explained that it seems like the President is testing what the legislature and the public want, noting that his plans have no apparent objective.

Noting that the chief executive recognized several issues, Hontiveros said that Marcos’ conclusion that the “state of the nation is sound” is incoherent with his assessment.

Hontiveros drew praises from social media users as she did not clap when Marcos was introduced during the Sona.