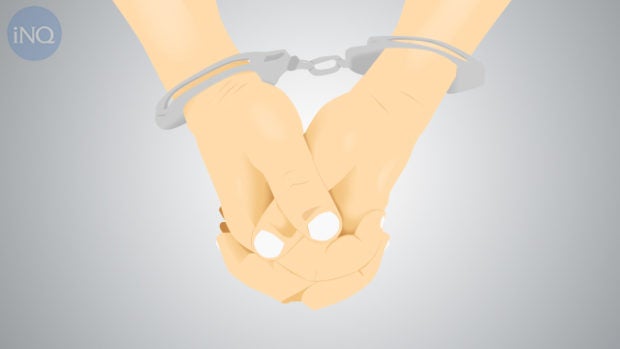 DAVAO CITY–Police said the two Lumad youths arrested after a protest rally at Freedom Park here in time for the first state of the nation address (Sona) of President Ferdinand Marcos Jr. on Monday were facing charges of trafficking of persons.

A statement released by the Davao City police to the media said Mawing Pangadas, 19, and Esmael Pangadas, 23, both residents of Kamingawan Palma Gil village of Talaingod, Davao Del Norte, were facing charges of trafficking of persons, based on a warrant of arrest issued by Judge Jimmy Bustillo Boco of the Regional Trial Court (RTC) 11 Branch 2 in Tagum City on June 7 this year.

But the sketchy report from the police did not reveal details as to who were the persons that the brothers supposedly trafficked or when and where did it happen.

The Pangadas brothers, who were both members of Kabataan Partylist in Southern Mindanao, were arrested at 3:05 p.m. while waiting for their ride home after they joined the protest rally.

Kabataan Partylist earlier posted an alert about the arrest, saying that the charges filed against the two youths were all trumped up and had no basis.

“They were charged with trumped-up cases of child trafficking and other baseless allegations,” Kabataan said in a statement. “The illegal arrest was done after the protest action. The police did not even bother to read them their rights. This is clearly fascism in action, blatantly disregarding due process and trampling on human rights. Under the Marcos administration, the youth are never safe. Dissenters are being illegally arrested and detained.”

According to the police, no bail was recommended for the charges that the youths were facing. The arresting team were elements of the Police Station 2 of the Davao City Police Office and the Police Regional Office here.  Germelina Lacorte, Inquirer Mindanao