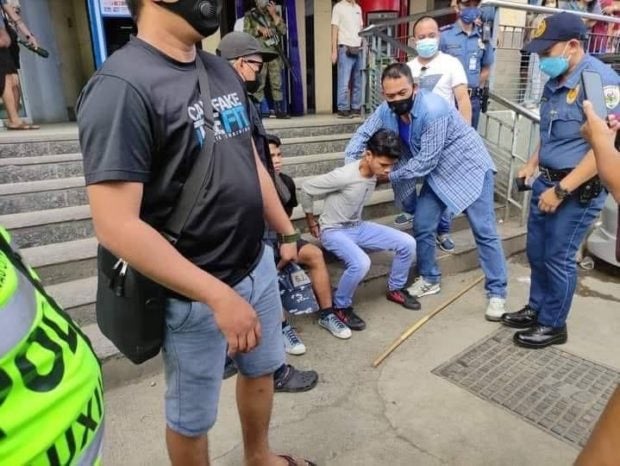 This photo from the Facebook page of the Kabataan Party-list shows the two Lumad members of the group in Southern Mindanao being arrested by the police in Davao City after they took part in a rally at Freedom Park in time for the State of the Nation Address of President Ferdinand Marcos Jr. on Monday, July 25, 2022.

DAVAO CITY — Two Lumad members of the Kabataan Party-list in Southern Mindanao were arrested by police on Monday afternoon after they joined the rally at Freedom Park here protesting President Ferdinand Marcos Jr.’s first State of the Nation Address (Sona).

In an alert posted on their Facebook page, the Kabataan Party-list said two of their members, namely Ismael Pangadas, 22, and Mawing Pangadas, 19, were arrested past 3 p.m., after the rally and as they were awaiting their ride home.

“They were charged with trumped-up cases of child trafficking and other baseless allegations,” Kabataan said in a statement. “The illegal arrest was done after the protest action. The police did not even bother to read them their rights. This is clearly fascism in action, blatantly disregarding due process and trampling on human rights. Under the Marcos administration, the youth are never safe. Dissenters are being illegally arrested and detained.”

Inquirer is still trying to get the police’s statement on the arrest.

Earlier at 1 p.m., Kabataan was among the progressive groups who gathered at Freedom Park here, bearing placards calling for a stop to red-tagging, a stop to militarization, and the scrapping of the oil deregulation law blamed for the unabated increase in fuel prices.

“We are now facing difficult times,” said PJ Dizon, secretary-general of the Kilusang Mayo Uno (KMU). “The continued increase in petroleum prices, which als results in the unabated increases in the prices of basic commodities, the threat of COVID-19, the prevailing uncertainties in our jobs and livelihood, and the lack of government aid to alleviate the sufferings of the poor. These are the reasons we are pushing for the nine-point agenda that we want the Marcos administration to address.”

He said that among the nine-point agenda they wanted the administration of Marcos Jr. to prioritize included addressing the prevailing high inflation by providing tax relief to consumers, reviving agriculture and making food production a priority, and making land reform and national industrialization the foundation of the country’s economic development, among others.