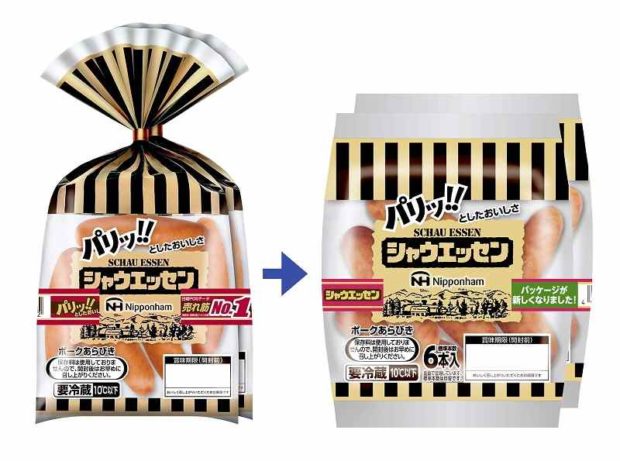 TOKYO — The drawstring pouch-style packages for sausages that have been familiar to Japanese consumers for over 30 years have been disappearing one after another this year as leading meat brands have changed the packaging design of their products.

Moves among food companies to refashion the packaging of their staple goods have increased in recent years. However, the changes are not just about boosting sales, as environmental considerations have also emerged.

‘Cutting off the topknot’

NH (Nippon Ham) Foods Ltd. released in January an online video titled “the ceremony to cut off the topknot.” In the clip, a huge, drawstring pouch-style package of its “Schau Essen” sausages is sitting in front of a gold leaf-covered folding screen. Likening the sumo ceremony of cutting off a wrester’s topknot to mark his retirement, the company’s executives, including Vice President Nobuhisa Ikawa, cut a piece of the packaging with scissors one after another.

The video creatively informs consumers of the package redesign, the first since the product debuted in 1985. The new package is rectangular.

Such packaging was adopted by food companies in succession in the 1980s based on the idea that the product looks like a gift that will attract consumers’ attention on the sales floor. The style became the staple design for sausage packages.

Changing a package design, which is the “face” of a product, is a difficult decision for a company to make amid fierce competition. Doing so is all the more consequential in the case of signature products like Schau Essen sausages.

In past sales tests, NH Foods attempted to dispense with the drawstring pouch-style package or shorten the topknot, but sales plunged. Sales department officials vehemently opposed such moves, saying NH Foods would get pummeled by its rivals.

However, the company made the switch because it believes consumer sentiment is strongly against using plastic.

“We reviewed the packaging, resolved to change it even at the cost of a decline in sales,” said Masayuki Osada, director of the marketing promotion department at NH Foods.

Plastic, which is cheaply mass-produced, is widely used for food packaging, cups and straws.

Orikane, a Nagoya-based packaging material wholesaler, was founded in 1887 as a manufacturer of wooden bento lunch boxes. Today, more than 90% of its products are made of plastic.

“Plastic was suited to the needs of the times when people pursued convenience,” said Sadanori Hattori, head of the public relations and SDGs section.

Plastic is cheap and convenient, but it does not naturally decompose. In the ocean, it simply drifts.

That negative characteristic was dramatically exposed to the world in 2015 when a grim video went viral showing a sea turtle with a plastic straw in its nose writhing as pliers were used to pull the straw out. 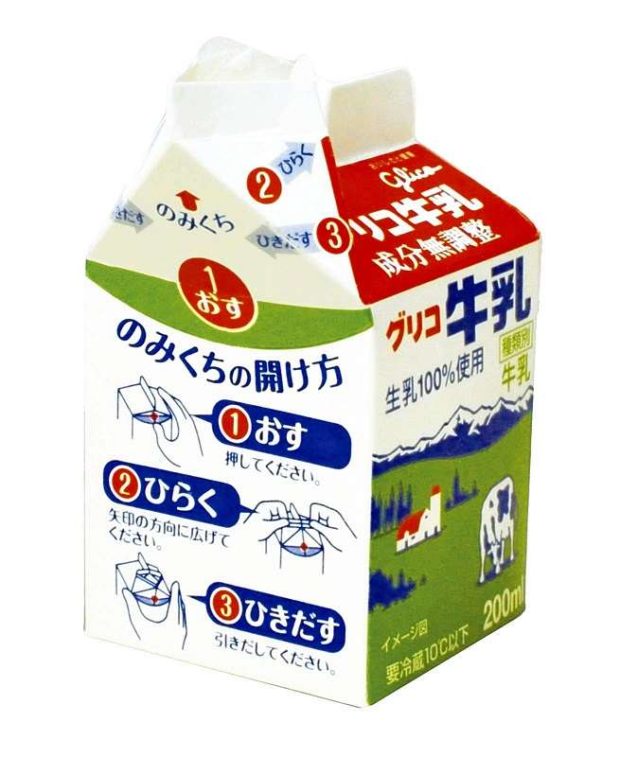 The United Nations adopted the Sustainable Development Goals that year.

The social responsibility of a corporation has come to be questioned critically, as has the mass consumption of plastic.

In response to this trend, Nestle Japan Ltd. changed the outer package of its KitKat chocolate bars from a plastic bag to a paper one. Fujiya Co., a leading confectioner, replaced the plastic packaging of its Milky candy with a paper one. Ten leading food companies, including Ezaki Glico Co., have eliminated plastic straws for almost all their small milk cartons used for school lunches.

What is the actual effect of these efforts to reduce plastic?

In the case of Schau Essen sausages, NH Foods said the firm has been able to cut plastic use by about 30%.

According to the Japan Ham&Sausage Processors Cooperative Association, a Tokyo-based industry group, half of the estimated 230,000 tons of sausages sold by its member companies last year were packed with drawstring pouch-style packages. As companies have eliminated that type of packaging, the total amount of plastic used is expected to decline substantially.

Nippon Paper Industries Co., which manufactures milk cartons for food companies, including Ezaki Glico, said the reduced amount of plastic for straws for the 10 food companies combined is estimated to total about 100 tons annually.

FoodClip, a media group focusing on the industry, surveyed food companies about their use of plastic. A survey taken in April last year found that 60% of food companies had discussed in the past year whether to review their packaging. Within that group, 63.5% of firms said they did so out of environmental considerations.

Amid the rising cost of various goods, including the price of crude oil, reducing the use of plastic is expected to lower material costs. As sales of Schau Essen sausages are said to have not changed markedly, gaining consumers’ understanding of environmental considerations appears to be making headway. Reviews of product packaging are likely to continue as well.

According to Fuji Chimera Research Institute, Inc., a Tokyo-based market research firm, the domestic market for food packaging in 2020 was ¥1.106 trillion. The move to replace plastic with environmentally friendly materials could also lead to new business opportunities and innovations.

Startup materials maker TBM Co. has been selling Limex, a product developed with limestone as the main raw material, as an alternative to plastic since 2018. While it is highly durable and recyclable, there exists a vast amount of limestone both inside and outside Japan, ensuring a stable supply, the company said.

TBM has supplied Limex to about 8,000 companies in Japan. The material was used to make the garbage bags utilized at the G20 summit in Osaka in June 2019.

Rock Field Co., a leading manufacturer of containers used for packaging side dishes, adopted Limex for use in some of its products in June. “When burned, it emits less CO2, thus contributing to an environmentally friendly corporate management,” said Rock Field President Takashi Furutsuka.

Nakabayashi Co., a leading stationery firm, has branched into the food packaging business by making use of its paper-processing technologies to develop a product that is highly efficient at preserving the freshness of food. In late July, the company will start to sell paper bags for coffee beans.