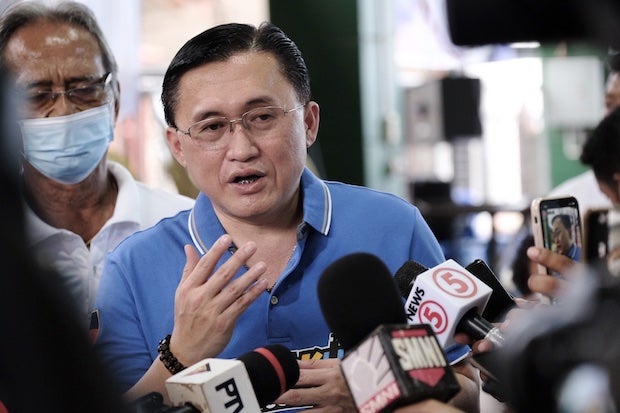 Sen. Christopher “Bong” Go has made another appeal to communist rebels to end their decades-long insurgency and rejoin society.

The insurgency, he pointed out, had only negative effects on society.

“Whenever a soldier dies we are in mourning. Whenever a rebel dies we are also hurt. They’re also Filipinos. Who wants to see Filipinos killing fellow Filipinos?” Go said in Filipino in an ambush interview after providing assistance to indigent residents of Davao City on Thursday, July 21.

According to the task force, an amnesty will “prevent the resurgence of the communist terrorist group, especially in geographically challenged, isolated and disadvantaged areas.”

Go then renewed his appeal to the rebels to yield to the government and return to the fold of the law.

“I’m just calling on rebels to come down if you think that what your fight is no longer going anywhere,” he said.

“Just unite with the government. Life in the city, in urban areas, is more comfortable if you think you can help our countrymen. Staying in the mountains will only add to the suffering,” he added.

In 2018, then-President Rodrigo Duterte signed Executive Order No. 70, creating the NTF-ELCAC and institutionalizing the whole-of-nation approach to attaining inclusive and sustainable peace under a National Peace Framework.

The whole-of-nation approach addresses the root causes of insurgencies and other armed conflicts by focusing on the efficient delivery of basic services and social development packages by the government.

Meanwhile, concerned agencies involved in the task force are providing the necessary assistance through various programs dedicated to helping the NTF-ELCAC achieve its goals. Among these is the Sustainable Livelihood Program by the Department of Social Welfare and Development, which provides livelihood assistance grants to former rebels and helps them become productive members of their communities.

Go has expressed his full support for giving full amnesty to former rebels or conducting peace talks with rebel groups, whichever the current administration would prefer to promote peace.

‘More to be done’ to end communist insurgency, DND says