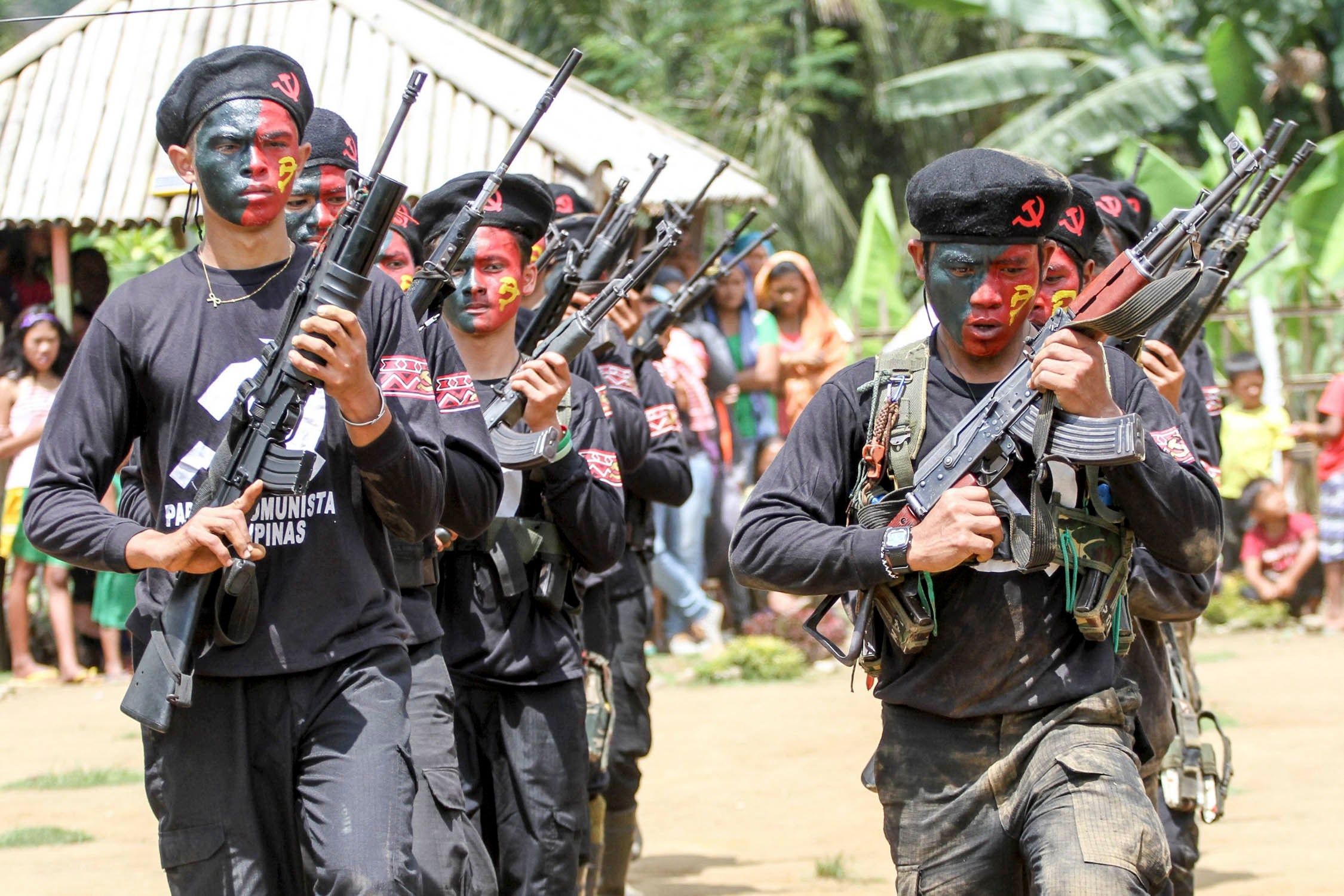 (FILE) This file photo taken on April 19, 2017 shows NPA guerillas, the armed wing of the Maoist rebels, marching during the turn-over ceremony of captured government soldiers to officials and peace advocates in the hinterlands of Matanao town, Davao del Sur province on the southern island of Mindanao. AFP PHOTO / MANMAN DEJETO

MANILA, Philippines — The number of fighters of the communist New People’s Army (NPA) is now down to 2,000 with active NPA guerilla fronts down to just 23 during the administration of former President Rodrigo Duterte, the Armed Forces of the Philippines (AFP) said.

AFP spokesperson Col. Medel Aguilar made the revelation during a press briefing at Camp Aguinaldo on Thursday.

“We have achieved significant gains in the conduct of military operations against the threat, I’m referring to the armed threat and [the dismantled guerrilla fronts are] almost 74 percent. There used to be 89 guerrilla fronts when President Duterte assumed office in 2016 but as of June 30 this year they were reduced to 23,” Aguilar said.

“Now as to the armed components, they [have been] reduced to less than 2,000,” he added, while pointing out that some 25,000 supporters of the Reds have also surrendered to authorities.

Former Philippine National Police (PNP) chief and now Senator Ronald Dela Rosa earlier explained in a Senate session that every NPA guerrilla front should have at least three platoons with around 100 armed combatants.

“I think we have gained much as far as defeating the armed component is concerned and that’s why you can now seldom hear about attacks or harassment,” Aguilar said.

Valbuena, however, did not divulge the exact numbers of their fighters, saying “the NPA does not provide exact figures of its actual strength as a way of keeping the enemy blind.”

Read Next
New COVID-19 cases in Pampanga’s capital hit another peak
EDITORS' PICK
House energy committee chair Arroyo bats for cheap electricity
How not to retire as an ex-president
Lawmakers eyeing more changes in Maharlika plan
The vivo Y02 is now available in the Philippines for only PHP 5,299
Shop smarter with vivo’s big 12.12 holiday deals
Hidilyn Diaz wins only gold missing from her collection
MOST READ
Don't miss out on the latest news and information.