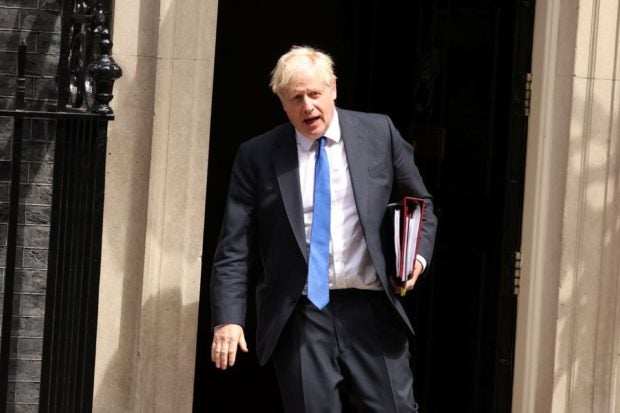 LONDON — British Prime Minister Boris Johnson defied pressure to quit on Wednesday from senior ministers and a mounting rebellion within his ruling Conservative Party, saying he will fight off any attempts to oust him over a series of scandals.

After more than 40 resignations from within the government and with many Conservative lawmakers in open revolt, some cabinet ministers went to Downing Street to tell Johnson he needed to go, a source said.

One encouraged him to make a dignified exit by setting his own timetable rather than face a confidence vote. Many lawmakers said it was now a question of when, not if, he has to go.

On Wednesday night, the attorney general for England and Wales, Suella Braverman, called on Johnson to resign and became the first cabinet minister to say they would run to replace him in any Conservative Party leadership contest.

“I do think the time has come for the prime minister to step down,” Braverman said on ITV. She said she did not want to resign from her post. “If there is a leadership contest I will put my name into the ring.”

Dozens have publicly criticised Johnson’s integrity after he was forced to apologize for appointing a lawmaker to a role involved in pastoral care, and had not recalled being briefed that the minister had been the subject of complaints about sexual misconduct.

It is the latest crisis to hit his administration after months of scandals and missteps, including a damning report into parties at his Downing Street residence and office that broke strict COVID-19 lockdown rules and saw him fined by police.

But despite the clamour for him to resign, James Duddridge, a Conservative lawmaker and close aide of Johnson, told Sky News the British leader “is buoyant, he is up for a fight” after a meeting with members of his top cabinet team.

Duddridge said Johnson and the newly-appointed finance minister Nadhim Zahawi would set out a new joint plan for the economy next week which would include tax cuts.

Johnson sacked Michael Gove, a senior minister who media earlier said had told the British leader he should quit. On Wednesday night, Secretary of State for Wales Simon Hart joined those resigning.

Earlier Johnson told a parliamentary committee: “I am not going to step down and the last thing this country needs, frankly, is an election.” 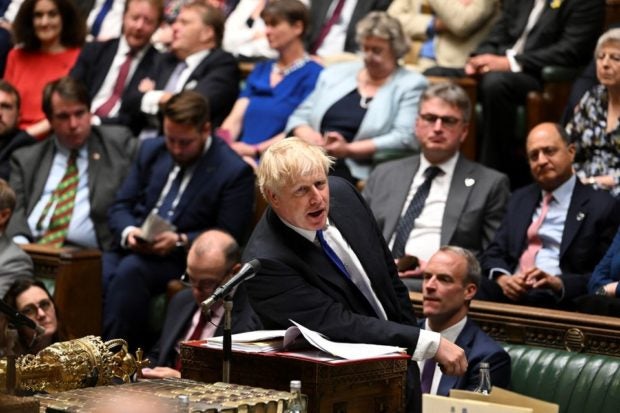 Johnson said had a mandate from the 2019 national election, which he won with a large majority, and it would not be responsible to walk away from the job in the middle of a cost-of-living crisis and war in Europe. Johnson has been a visible supporter of Ukraine following Russia’s invasion in late February.

Johnson also refused to say if he would try to stay in the job even if he lost a confidence vote from his own lawmakers. That could come next week if they agree to change the party’s rules, which only allow one such challenge a year. He narrowly won a similar vote last month.

“The prime minister is deluded if he feels he can cling on in the face of collapsed parliamentary support,” said a senior Conservative lawmaker on condition of anonymity. “He is embarrassing the Conservative Party and showing contempt for the electorate.”

But culture minister Nadine Dories said she was behind Johnson and, when asked if others also still backed him, she replied: “Yes, definitely.”

The dramatic resignations on Tuesday of his health and finance ministers triggered a growing swell of other ministerial departures and many Conservative lawmakers questioned his fitness to govern.

At parliamentary questions on Wednesday some Conservatives struggled not to laugh when others poked fun at him and he took a pummelling from a committee of senior politicians over his past behavior, his motivation and some of the scandals that have come to define much of his tenure. 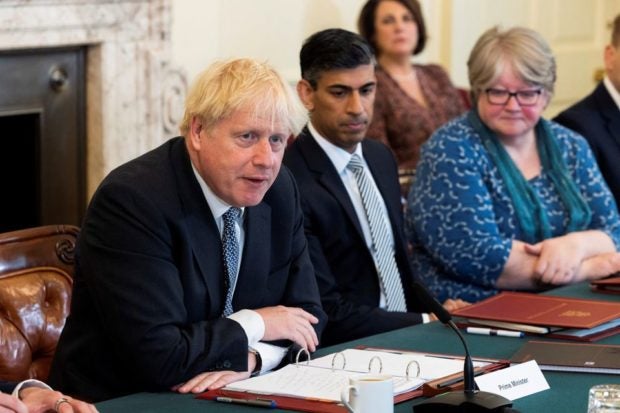 The ebullient Johnson came to power nearly three years ago, promising to deliver Britain’s exit from the European Union and rescue it from the bitter wrangling that followed the 2016 Brexit referendum.

Since then, some Conservatives have enthusiastically backed the former journalist and London mayor while others, despite reservations, supported him because he was able to appeal to parts of the electorate that usually rejected their party.

That was borne out in the December 2019 election. But his administration’s combative and often chaotic approach to governing and a series of scandals have exhausted the goodwill of many of his lawmakers while opinion polls show he is no longer popular with the public at large.

In addition to the scandals, there have also been policy U-turns, an ill-fated defence of a lawmaker who broke lobbying rules, and criticism that he has not done enough to tackle inflation, with many Britons struggling to cope with rising fuel and food prices.

Despite even one-time supporters saying the current crisis could only end with his resignation, Johnson’s spokesperson said he was confident of winning another vote by his party.

All might change next week when the 1922 Committee that sets the rules for the Conservative parliamentary party holds an election to its executive that could usher in a rule change to allow a second confidence vote on his leadership.

Johnson has tried to reassert his authority by quickly appointing Zahawi, a rising Conservative star widely praised for the successful rollout of COVID-19 vaccines, as finance minister.

In parliament, senior ministers struggled to contain their laughter as the opposition Labour leader poked fun at his cabinet for being in the “charge of the lightweight brigade”.

“At some point, we have to conclude that enough is enough. I believe that point is now,” said Sajid Javid, in his resignation speech as health minister, with Johnson listening stony-faced.