California wildfire rages as US bakes in record-setting heatwave 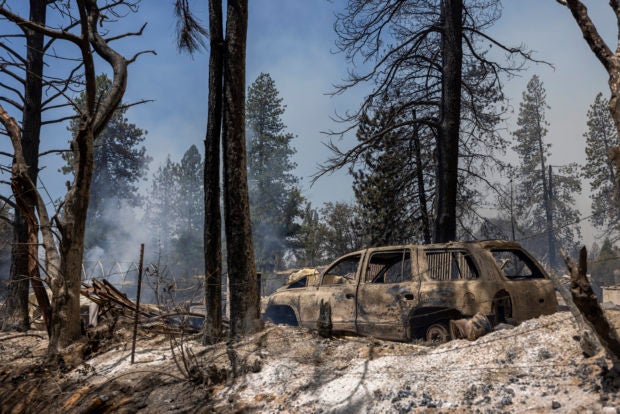 Destroyed property is left in its wake as the Oak Fire chews through the forest near Midpines, northeast of Mariposa, California, on July 23, 2022. AFP

LOS ANGELES—A California wildfire ripped through thousands of acres Saturday after being sparked a day earlier, as millions of Americans sweltered through scorching heat with already record-setting temperatures due to climb.

The heat wave encompassing multiple regions has increased the risk of blazes, such as the major Oak Fire, which broke out Friday in California near Yosemite National Park, where giant sequoias have already been threatened by flames in recent days.

The fire — described as “explosive” by officials — grew from about 600 acres to around 11,900 acres (4,800 hectares) within 24 hours. Concentrated in Mariposa County, it has already destroyed ten properties and damaged five others, with thousands more threatened.

More than 6,000 people had been evacuated, said Hector Vasquez, a California Department of Forestry and Fire Protection official, as the fire remained uncontained as of Saturday evening.

The department said the fire’s activity was “extreme.”

California Governor Gavin Newsom on Saturday declared a “state of emergency” in Mariposa County, citing “conditions of extreme peril to the safety of persons and property.”

The blaze left ashes, gutted vehicles and twisted remains of properties in its wake, as emergency personnel worked to evacuate residents and protect structures in its path.

More than 500 firefighters are working to extinguish the flames and are being assisted by aircraft, Vasquez said. Officials cited by the Los Angeles Times said it could take a week to contain.

“There’s personnel showing up from various departments all over the state to help control this fire,” Vasquez told AFP, saying the situation remained “really challenging.”

Climate scientist Daniel Swain tweeted that the fire was “exhibiting consistently extreme behavior,” while stunned social media users posted images of billowing plumes of smoke that reached thousands of feet into the air.

In recent years, California and other parts of the western United States have been ravaged by huge and fast-moving wildfires, driven by years of drought and a warming climate.

Drought and high temperatures have been “not in our favor,” Vasquez said. 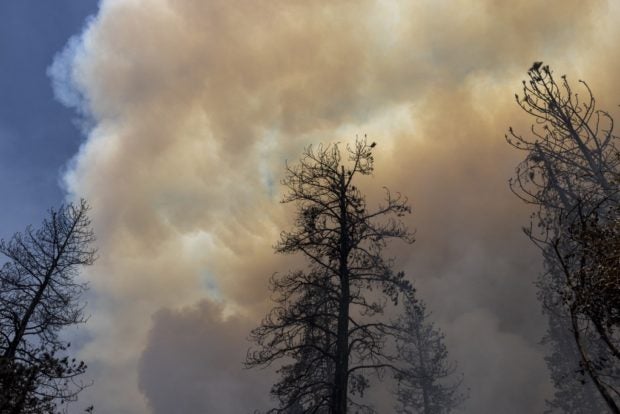 Heavy smoke rises as the Oak Fire chews through the forest near Midpines, northeast of Mariposa, California, on July 23, 2022. AFP

Evidence of global warming could be seen elsewhere in the country, as more than a dozen states were under a heat advisory.

The central and northeast US regions face the brunt of the extreme temperatures, which are not expected to peak until Sunday at the earliest and have sent public health officials scrambling.

“From the southern Plains into the East, it will feel extremely oppressive,” the National Weather Service (NWS) said Saturday evening, warning as well of possible severe storms.

Central US metropolitan areas such as Dallas and Oklahoma City were expected to reach highs of more than 100 degrees Fahrenheit (above 38 degrees Celsius) for at least the next five days.

A heat emergency is in effect for cities up and down the northeast coast, from Boston to Philadelphia to Washington.

Not even the usually cool Pacific Northwest will escape the far-reaching heat, with the region expected to face several days in the 90s next week.

The high temperatures have already caused an uptick in emergency calls for heat-related illnesses.

Cities have been forced to open cooling stations and increase outreach to at-risk communities such as the homeless and those without access to air conditioning.

“This is really one of the things that we recognize in Oklahoma — heat is the number one weather-related killer across the United States. It far surpasses any other” nature-related cause of death, Joseph Kralicek, director of the Tulsa Area Emergency Management Agency, told CNN.

Residents of the central US city were expecting temperatures to reach 103F (39C) Saturday and up to 106F (41C) on Sunday and Monday.

The nation’s capital Washington reached temperatures near 100F (38C) on Saturday, and was expected to reach or surpass that level on Sunday for the first time in years.

New York was not far behind.

“Sunday grows even hotter in the northeast,” it added.

Severe thunderstorms are expected in the Midwest Saturday, with the potential for damaging winds, large hail and tornadoes, the NWS said.

Various regions of the globe have been hit by extreme heat waves in recent months, such as Western Europe in July and India in March to April, incidents that scientists say are an unmistakable sign of a warming climate.

Read Next
QC gov’t workers to leave work early for Bongbong Marcos’ Sona
EDITORS' PICK
China’s Xi unwilling to accept vaccines despite threat from protests — US intel
What’s in a name? ‘Maharlika’ evokes time of mythmaking
Easterlies to bring rain in PH on Sunday — Pagasa
Complete your early Christmas shopping with vivo V25 Series
The vivo Y16 makes the season of giving more thoughtful for the whole family
House energy committee chair Arroyo bats for cheap electricity
MOST READ
Maxene Magalona sees separation from Rob Mananquil as ‘blessing in disguise’: ‘There’s no more anger’
What’s in a name? ‘Maharlika’ evokes time of mythmaking
Are we ready for a sovereign wealth fund?
NBA: Warriors use 3-point barrage to ground Rockets
Don't miss out on the latest news and information.