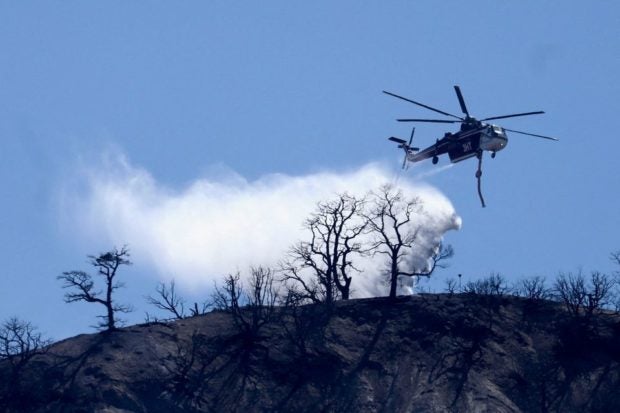 LOS ANGELES — Authorities issued evacuation orders on Monday for communities in the path of a wildfire that broke out over the weekend in the San Gabriel Mountains northeast of Los Angeles and was burning toward populated areas.

The so-called Sheep Fire, which erupted on Saturday evening in the Angeles National Forest, had burned across some 990 acres of brush and vegetation as of Monday afternoon.

The area has been left parched by an ongoing drought plaguing California and much of the U.S. Southwest.

The San Bernardino County Sheriff’s Office ordered evacuations for Wrightwood, a ski town of some 4,500 people at along the Pacific Crest Trail, as well as homes dotted along Highway 2.

The blaze was listed as only 5 percent contained as of Monday morning and the nearly 700 firefighters were hampered by flames burning in dense vegetation and steep terrain, fanned by erratic winds, fire managers said on tracking website InciWeb.

No casualties had been reported and no structures burned, according to fire managers, but downed power lines were hampering communications.

An evacuation center for pets and small animals had been set up in San Bernardino, according to the website.

California has endured a string of devastating wildfires over the past several years as a lingering drought and warmer temperatures have left forest and grasslands bone dry.

In Arizona, hundreds of residents near Flagstaff were evacuated over the weekend as a wind-driven blaze threatened communities there.