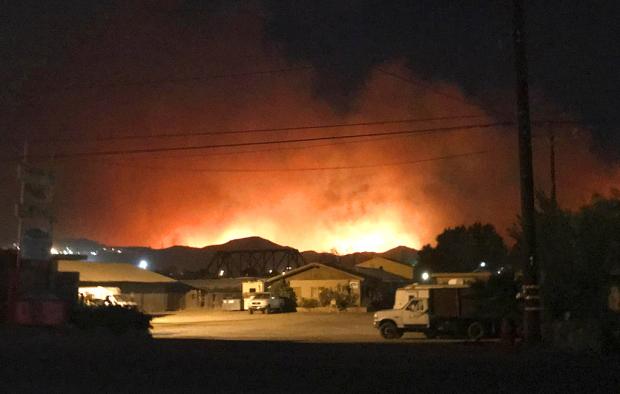 Flames from a wildfire loom up over a neighborhood in Santa Paula, California, Monday, Dec. 4, 2017. Ventura County fire officials say the blaze broke out Monday east of Santa Paula, a city of 30,000 people about 97 km (60 miles) northwest of downtown Los Angeles. Powerful winds are pushing the blaze west toward the city along Highway 150, which is shut down. (Photo by MEGAN DISKIN / The Ventura County Star via AP)

SANTA PAULA, California — Ferocious winds in Southern California whipped up an explosive wildfire that forced thousands of homes to evacuate and could soon threaten a city of more than 100,000, authorities said.

The blaze broke out Monday and grew wildly to more than 3,885 hectares (15 square miles) in the hours that followed, consuming vegetation that hasn’t burned in decades, Ventura County Fire Sgt. Eric Buschow said.

The winds were pushing it toward Santa Paula, a city of some 30,000 people about 97 km (60 miles) northwest of Los Angeles. Most of the evacuated homes were in that city.

Authorities said that the city of Ventura, which is 19 km (12 miles) southwest and has 106,000 residents, was likely to feel the effects soon.

“The fire growth is just absolutely exponential,” Ventura County Fire Chief Mark Lorenzen said. “All that firefighters can do when we have winds like this is get out ahead, evacuate people, and protect structures.”

Thomas Aquinas College, a school with about 350 students, has also been evacuated, with students going to their own homes or to those of faculty and staff, the college said in a statement.

One person was killed in an auto accident associated with the fire, officials said. They gave no further details.

Winds exceeding 64 kph (40 mph) and gusts over 97 kph (60 mph) have been reported in the area and are expected to continue, the National Weather Service said.

Firefighters and aircraft from neighboring Los Angeles and Santa Barbara counties were pouring in to help, though the darkness and winds forced the grounding of planes late Monday night.

Thousands of homes were without power in the area.

Your subscription could not be saved. Please try again.
Your subscription has been successful.
Read Next
DOTr vows not to use ‘underhanded tactics’ vs Piston leader
EDITORS' PICK
House energy committee chair Arroyo bats for cheap electricity
CBCP releases litany of thanks for better health
Omega Speedmaster super racing: Tiny device massive change
vivo Philippines offers a free bouquet of flowers and a premium necklace perfect for Valentine’s Day
US gets access to more PH bases
12-year data track poor training of PH teachers
MOST READ
Vice Ganda gets called out for ‘unfair treatment’ of ‘It’s Showtime’ co-host Karylle
Fuel price rollback expected on Feb 7
NorthPort, Bolick reach temporary solution to impasse
Sandara Park ‘got in trouble’ for not pressing elevator button for a company head
Don't miss out on the latest news and information.