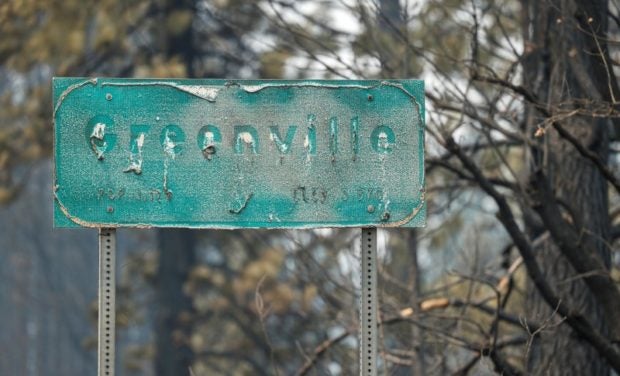 The sign leading to Greenville is pictured with letters that melted off when the Dixie Fire burned through the town, in Greenville, California, U.S. August 8, 2021. REUTERS FILE PHOTO

LOS ANGELES — An enormous wildfire raging across Northern California for nearly a month has burned down another 550 homes, fire officials said on Wednesday, becoming one of the most destructive in state history.

The Dixie Fire, which broke out on July 14 in the Sierra Nevada Mountains some 160 miles (260 km) northeast of Sacramento, is the second largest in state history. Crews had contained only 30 percent of the blaze as of Wednesday evening.

Temperatures were expected to cross over 100 degrees Fahrenheit (37.8 degrees Celsius) in coming days as a high pressure weather system, described by forecasters as a “heat dome” bakes the Pacific Northwest.

“High pressure continues to build over the incident and will be the dominant feature with predicted thunderstorms moving in this week,” the California Department of Forestry and Fire protection said in an incident update.

The thunderstorms can rake the landscape with so-called dry lightning, igniting more flames across Northern California in forests and brush left brown and parched from years of drought.

The Dixie Fire has scorched more than 500,000 acres, making it by far the largest and most destructive of 11 wildfires burning across California, fought by nearly 10,000 personnel. Two firefighters and a civilian have been injured.

The blaze has now destroyed more than 1,000 single-family homes, along with hundreds of other structures. Flames roared through the historic mining town of Greenville last week, leaving its main street in smoldering ruins.

California, which typically experiences peak fire season later in the year, is on pace to suffer more burnt acres this year than last, the worst fire season on record.

The state’s five largest wildfires in history have all occurred in the last three years, burning more than 2.5 million acres and destroying 3,700 structures.

The Dixie Fire is second in size only to last year’s August Complex, which was comprised of several smaller fires that merged together to make one massive conflagration.