MANILA, Philippines — Party-list groups have condemned the ban on wearing clothes with political messages during the first State of the Nation Address (Sona) of President Ferdinand “Bongbong” Marcos Jr. on Monday.

Members of the Congress, along with other Sona guests, have previously used fashion as a means of expressing their respective advocacies.

But in a memorandum issued by the House of Representatives Secretary General Mark Llandro Mendoza, Sona attendees this year were told that “wearing of clothes with political messages shall not be allowed.”

Several party-list groups, including ACT Teachers and Kabataan, have since called for the reversal of the ban, noting that no such rule has ever been imposed in previous Sonas.

“This Representation urges your good office to withdraw the said provision and/or not implement it on the day of the State of the Nation Address. We find no provision in any of the past Congresses’ Rules of the House of Representatives and the Senate — both of which are effective during the Joint Session — that is violated by the wearing of clothes with political messages,” ACT Teachers Party-list Representative France Castro said in a letter addressed to Mendoza.

She further stressed that in recent history, a rule of the same nature has not been implemented in both chambers “given its intrusion into the personal freedom of dress of the Member, and more importantly, the violation of the civil and political rights of the people on whose behalf the House Member sits on the Joint Session.” 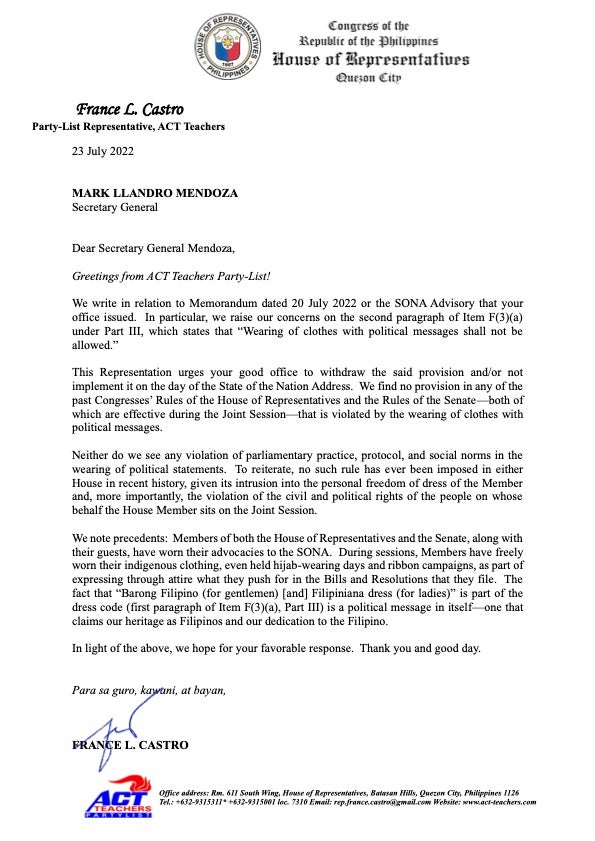 Kabataan Party-list also called out the ban as it flaunted the barong designed to be worn by its Representative Raoul Manuel.

(This is the first time in recent history that an explicit prohibition is issued. Protests were prohibited, and now political messages in clothing are also banned because they seem to be so afraid of art? Is this Martial Law?)

He then asserted the need to uphold the people’s right to express themselves through various means, including art and fashion.

“As a genuine representative of the youth, it will be an honor for me to wear in clothing the youth agenda for genuine social change,” he added.

PNP to Sona protesters: Give Bongbong Marcos admin a chance