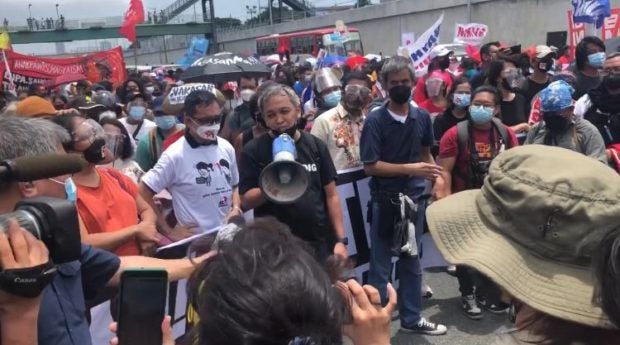 Activist Renato Reyes confronts the police blocking their way to the St. Peter Parish along Commonwealth Avenue in Quezon City in this file photo taken in 2021. INQUIRER.net photo / Zacarian Sarao

MANILA, Philippines — The Quezon City government green-lighted mass actions of both progressive and Marcos-allied groups along Commonwealth Avenue for the first State of the Nation Address of President Ferdinand Marcos Jr. on Monday.

Bagong Alyansang Makabayan’s (Bayan) request for a rally permit was earlier denied by the Quezon City Department of Public Order and Safety.

It then appealed to reverse the decision, seeking the intervention of Quezon City Mayor Joy Belmonte.

It later coordinated with key city administrators, the Quezon City Police District, and the Department of the Interior and Local Government to decide on the rally permit applications for Marcos’ first Sona.

“Based on these dialogues, the local government has decided to allow progressive groups to conduct their march and assembly along Commonwealth Avenue (Eastbound) up to the corner of Tandang Sora Avenue on Monday, July 25, while the PBBM and allied groups will be allowed to conduct their program along Interim Batasan Pambansa Road near Sinagtala Street, Barangay Batasan Hills,” the statement read. 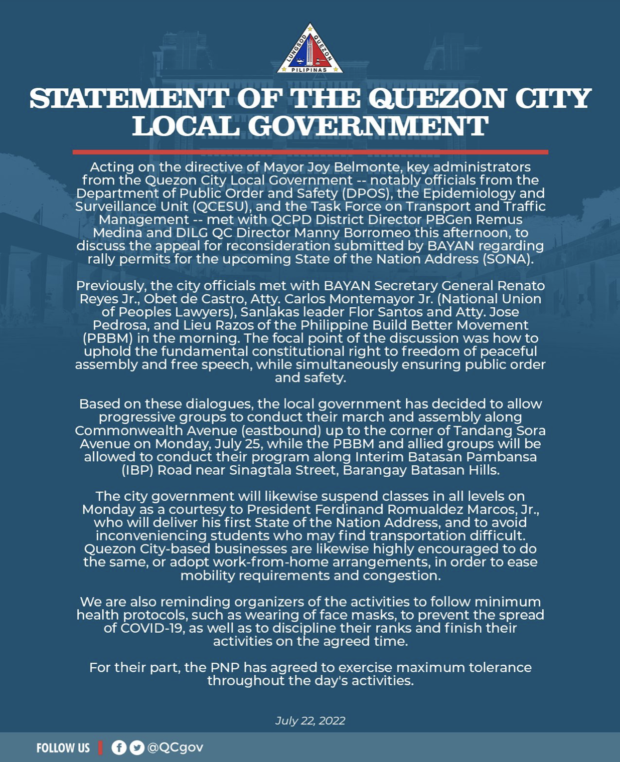 Also, they must complete their activities by the agreed time, with the Philippine National Police (PNP) promising maximum tolerance.

In a statement, Bayan thanked Belmonte “for her timely intervention in the matter, for giving us a chance to be heard, and for asserting the authority of the [local government unit] over the PNP in granting permits for public assemblies.”

As a courtesy to Marcos, who will deliver his first Sona on Monday, city hall suspended classes on all levels.

“Quezon City-based businesses are likewise highly encouraged to do the same, or adopt work-from-home arrangements, in order to ease mobility requirements and congestion,” it added.