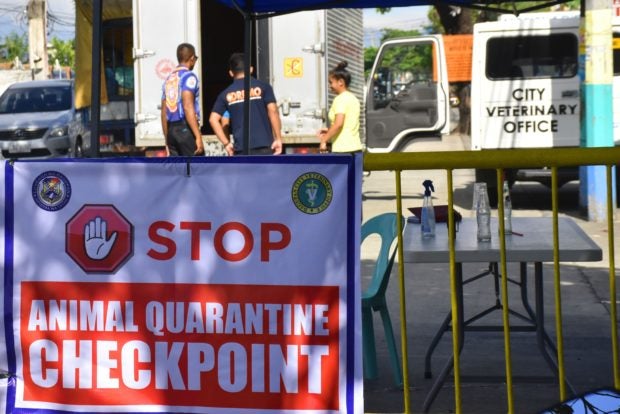 LAOAG CITY—Ilocos Norte towns and this capital city have reimposed stringent border protocols, including quarantine checkpoints, to prevent the African swine fever (ASF) from infecting hogs in their areas.

In Solsona, the first town where ASF was detected last year, Mayor Joseph De Lara ordered on Friday, July 22, the installation of checkpoints on all possible entry points for the delivery of hogs.

De Lara also suspended the entry and exit of live weight and frozen meat in the town. He also banned  backyard slaughtering of hogs.

In Dingras, Mayor Joeffrey Saguid also regulated the movement of hogs in the town and prohibited the entry of live hogs from ASF-infected areas.

On July 20, all vehicles entering Laoag were inspected. The control and checkpoints cover Lagui-Sail, Barit, San Mateo, and Balatong villages.

Laoag and the towns of Dingras and Solsona are pink zones, according to the July 15 data from the Department of Agriculture’s Bureau of Animal Industry.

Pink zones have no cases of ASF but adjacent to an infected zone. According to the DA, it could also be a previously infected area with no detected case for at least 90 days.

ASF has imperiled the Ilocos Norte hog trade, valued at around P4.98 billion in 2020.

The latest market monitoring showed that pork prices in Laoag ranged from P370 to P380 per kilo.