Doctor in slay of Davao student out on bail | Inquirer News

Doctor in slay of Davao student out on bail 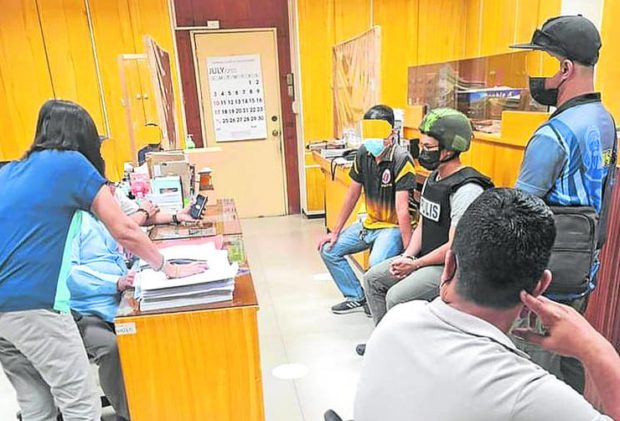 FREE FOR NOW Dr. Marvin Rey Andrew Pepino (third from right, in vest and helmet), suspect in the killing of 19-year-old student Amierkhan Mangacop on July 2, posts bail at the Davao City Hall of Justice on Thursday. —CONTRIBUTED PHOTO

DAVAO CITY—A doctor who is accused of killing a 19-year-old student at a bar here on July 2 has been granted temporary freedom on Thursday after he posted bail.

Dr. Marvin Rey Andrew Pepino, a nonuniformed personnel of the Davao regional police office, was able to post bail after his case was downgraded on Tuesday from murder to homicide by the City Prosecutor’s Office.

His temporary freedom came on his 32nd birthday.

Pepino, a scion of former ranking police officials in the region, posted P180,000 bail—P120,000 for the homicide charge and P60,000 for the charge of violating the firearms law as he had no permit to carry a gun outside of his residence.

Pepino is accused of killing Grade 9 working student Amierkhan Mangacop, who would have turned 20 on Saturday. Mangacop was shot seven times.

“The family is outraged and shocked at the speed the City Prosecutor’s Office can release their resolution and decide on the case. It was only last Friday, July 15 … that the NBI (National Bureau of Investigation) submitted the results of its investigation,” read a statement from Mangacop’s camp.

“We pray that this is the usual process for every case and not simply because Doctor Pepino is rich and influential. We hope this downgrade to homicide is not just someone’s birthday gift to Doctor Pepino,” the Mangacop family added.

The slain student’s relatives said they would discuss their next moves with their lawyers.

“We do not yet know how to commemorate Amierkhan’s birthday this Saturday, July 23 … We are asking for everyone’s prayers. We will continue to fight for justice for the murder of Amierkhan Pulalon Mangacop,” the family said.

On July 15, the same day the NBI regional office submitted the results of their investigation, three additional attempted murder cases were filed by witnesses against the suspect.

The Mangacop family on Wednesday already filed a motion for the issuance of a precautionary hold departure order against Pepino before the city prosecutor.

“The family feels that since he has the financial capacity, he would escape prosecution by going abroad for good,” the Mangacop camp’s statement said.

The family had maintained that Mangacop was not in the bar, not drunk and only arrived at the scene to fetch his cousin while the commotion, which started inside Lugar Café and Bar, continued outside the establishment.

A day after the shooting and killing of Mangacop, video footage posted on social media by people inside and outside the bar during the incident showed that Mangacop was still wearing his motorcycle helmet when he and his cousins arrived at the parking lot just outside the bar and passed by the commotion involving Pepino.