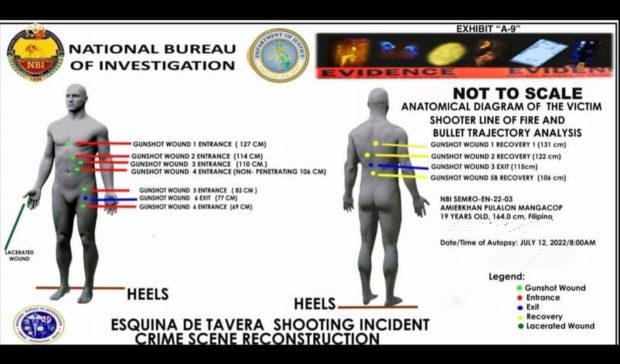 A diagram showing Amierkhan Mangacop’s bullet wounds based on the autopsy findings of the National Bureau of Investigation (NBI). Amierkhan was killed by a doctor, who happened to be a non-uniformed personnel of the Police Regional Office 11, outside a bar in Davao City at the dawn hours of July 2. Police initially reported the shooting as “self-defense” on the part of the police doctor, prompting the family to turn to the NBI. CONTRIBUTED PHOTO

The three complainants whose identities were still being withheld for security reasons filed three separate cases of attempted murder at the Office of the City Prosecutor here on Friday, July 15, against the doctor, a non-uniformed personnel at the Police Regional Office 11, who reportedly killed the Grade 9 working student who was only out to fetch a cousin from the bar, the Mangacop family’s legal counsel said.

This developed as Amierkhan’s family expressed shock and outrage over the details of how he was killed, as shown in the National Bureau of Investigation (NBI) autopsy findings.

A copy of the autopsy report obtained by the Inquirer showed that Amierkhan died from multiple gunshot wounds, six of which proved fatal.

One of the wounds hit dead center and perforated the right atrium of his heart. Another caused severe damage to his liver, while still another damaged his stomach, spleen, and large intestine. He also sustained rib fractures and muscle damage. The NBI forensics team also recovered three bullets from his body, two of which were lodged in his spinal column.

“The autopsy showed that Dr. Pepino brutally murdered Amierkhan,” said the statement from the Mangacop family, who only agreed to the autopsy after consultations with elders and religious leaders in the bid to seek justice for their kin. Autopsies were supposed to be forbidden in Islam except in rare cases, when a crime investigation is involved.

“The family is shocked and outraged but remains hopeful and confident that these findings will serve the end of justice for the brutal murder of Amierkhan,” said the family’s statement. “Dr. Pepino did not (even) need to fire multiple shots, as the report showed that even by just one bullet—his murderous intent could still be completed,” it added.

The NBI 11 also submitted at the City Prosecutors Office the results of their parallel investigation on Friday and recommended filing a murder case against Pepino, said Ely Leaño, NBI 11 spokesperson. Leaño said their forensic team recovered the slugs from Amierkhan’s body.

“We were able to recover three slugs (coming) from the 9mm caliber firearm. We also discovered that the bullets used were hollow point (bullets),” Leaño told reporters.

He explained that hollow point bullets would expand upon impact and were considered “special ammunition.”

“This is special ammunition, considering that once the bullet is being fired, it will create a bigger wound once it hits the body of the victim,” he said. “(Once a) particular shooter uses that bullet, (it could mean that) he has the intention to inflict a serious injury, or a serious wound on his victim, and of course, with the ballistic examination (and) the bullet’s trajectory line analysis being conducted, we were able to get the exact measurement of the five bullets that hit the body of the victim,” he said.

“…Considering that the subject respondent (Pepino) used a firearm meaning, (there was) inequality…between the victim and the aggressor,” Leaño said.

According to Leaño, they discovered that during the commotion, Dr. Pepino drew his firearm and pointed at Amierkhan’s companions.

“We were able to discover that during the commotion, the subject-respondent (Pepino) had drawn his firearm and pointed to a companion of this victim. But the shooting did not happen because someone from the group of the victim managed to grab (Pepino),” Leaño said, adding that this was the first physical clash between Pepino and Amierkhan’s group. The second clash was when he shot Amierkhan.

A day after the killing of Amierkhan, videos released on social media by persons inside and outside the bar during the incident showed that Mangacop was seen still wearing his motorcycle helmet when he and his cousins arrived at the parking lot just outside the bar and passed by the commotion involving Pepino and another group.