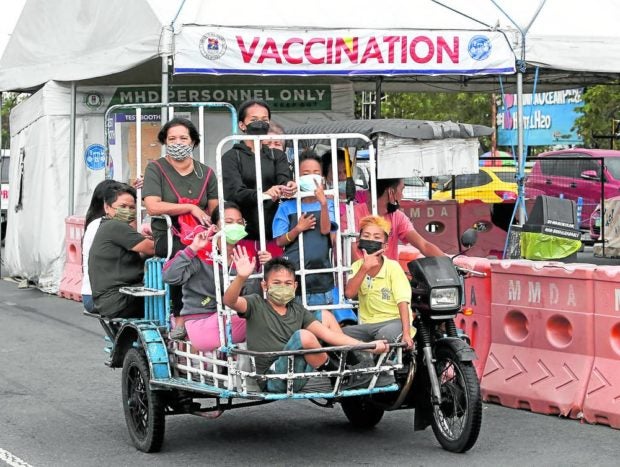 Family on a sidecar of a motorbike near a vaccination center. (File photo by MARIANNE BERMUDEZ / Philippine Daily Inquirer)

MANILA, Philippines — Metro Manila and 85 provinces and cities in the country will remain under Alert Level 1, unless the government’s pandemic task force issues new alert level classifications by Monday.

Alert Level 1, the most relaxed in the four-alert level system that the government introduced in September 2021, was first declared over the National Capital Region (NCR) and other localities on March 1, as the government sought to relax restrictions on public mobility after more people were getting vaccinated against COVID-19.

But other areas continued to be under alert level 2, which prohibits certain establishments and limits businesses allowed to operate to a certain maximum percentage of their capacity. These restrictions are removed completely in areas under alert level 1.

The government has yet to change these alert levels in the succeeding two-week periods after March 15 (eight in all) that they were subject to review.

After the latest period passed on Friday the Inter-Agency Task Force for the Management of Emerging Infectious Diseases (IATF) will again assess these alert levels on Monday, according to Press Secretary Trixie Cruz Angeles.

The IATF said the capital region and 166 other cities and municipalities are under Alert Level 1.

Also under that status are the provinces of Abra, Apayao, Kalinga and Mountain Province in the Cordillera Administrative Region (CAR); all the provinces of the Ilocos Region, Cagayan Valley and Central Luzon; the provinces of Cavite, Laguna, Batangas and Rizal in Calabarzon; Mindoro Oriental, Marinduque and Romblon in Mimaropa; Albay, Catanduanes and Sorsogon in the Bicol Region; Aklan, Capiz, Guimaras and Iloilo in Western Visayas; Siquijor in Central Visayas; Biliran, Eastern Samar and Southern Leyte in Eastern Visayas; Bukidnon, Camiguin, Misamis Occidental and Misamis Oriental in Northern Mindanao; Davao Oriental in the Davao Region; South Cotabato in Soccsksargen; and Surigao del Sur, Agusan del Norte and Agusan del Sur in the Caraga Region.

Areas under Alert Level 2 are the provincial capital of Isabela in Basilan, General Santos City in Soccsksargen, and the provinces of Benguet and Ifugao in CAR; Quezon in Calabarzon; Occidental Mindoro and Palawan in Mimaropa; Camarines Norte, Camarines Sur and Masbate in Bicol; Antique and Negros Occidental in Western Visayas; Negros Oriental, Bohol and Cebu in Central Visayas; Leyte, Northern Samar and Western Samar in Eastern Visayas; Lanao del Norte in Northern Mindanao; North Cotabato, Sarangani and Sultan Kudarat in Soccsksargen; Dinagat Islands and Surigao del Norte in Caraga; the provinces of the Davao Region except Davao Oriental; and all the provinces of the Zamboanga Peninsula and the Bangsamoro Autonomous Region in Muslim Mindanao.

In a move influenced by the latest COVID-19 situation, the Supreme Court has suspended the operation of night courts nationwide and ordered limited in-person court proceedings, as daily coronavirus cases rose to a five-month high of 2,371, according to the latest data from the Department of Health (DOH) on Thursday.

According to a new directive, Circular No. 180-2022, issued by Court Administrator Raul Villanueva on Friday, night-shift courts “are not allowed to operate in [areas] where these have been organized or required.”

These courts are usually set up as venues for filing bail or hearing urgent criminal complaints way past office hours.

The circular stated further that “in-court or face-to-face hearings are given priority, [but] all judges are [still] allowed … to conduct fully remote videoconferencing hearings, for at least thrice in a week.”

Only 50 percent to 75 percent of a staff in a given court are allowed to report to work, while flag ceremonies and work on Saturdays are also prohibited for now, according to the order.